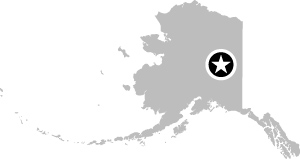 The Trans-Alaska Pipeline System (TAPS) runs for almost 1,300 kilometers north-south across Alaska, bringing oil from the Arctic Ocean to the port of Valdez where tankers load up with crude to be shipped to the rest of the U.S. for refining. The pipeline crosses difficult terrain—between the north and south of Alaska, there are mountains, permafrost, hundreds of rivers, and active fault lines.

Most of the pipeline is difficult to access, and the pipeline company unfortunately no longer offers tours of its pump stations. But on the highway outside Fairbanks, you can stop off near the small commune of Fox, where a visitor center tells the story of the pipeline. From there you can walk right up to the pipeline itself before it disappears into the ground.

The pipeline was opened in 1977 and is 1.22 meters in diameter. The combination of Alaska’s climate, landscape, and the temperature of the oil flowing through the pipeline creates many challenges.

Oil typically leaves the ground at around 80°C, and as it passes through the pipeline it has a temperature of around 50ºC. The above-ground section of the pipeline (about 675 kilometers) is elevated so that the heat does not melt the permafrost. It’s ...