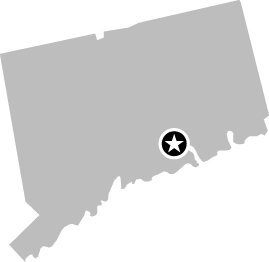 The USS Nautilus was the first nuclear submarine, and the first submarine to pass submerged over the Geographic North Pole. When the submarine launched, the captain signalled “Underway on nuclear power,” and then proceeded to break the underwater sustained speed record and the longest submerged cruise covering 2,100 kilometers.

Launched in 1955, Nautilus remained active until 1980, and was then decommissioned. The submarine is now the prize exhibit at the U.S. Navy Submarine Force Museum, where visitors can climb aboard the historic vessel and take an audio tour.

When entering the museum, visitors pass through a pair of metal circles representing the circumference of the hull of the first U.S. submarine (the USS Holland, built in 1897) and the currently active USS Ohio, launched in 2007. The USS Holland had a beam (the width of the widest part of the craft) of just over 3 meters and could carry a total of 6 people; the USS Ohio is over 12 meters across with a crew of 150.

Inside the museum are scale models of every type of U.S. submarine. There’s a full-size ...