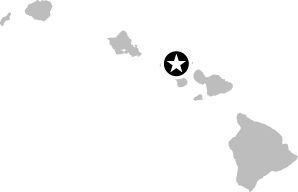 Between 1866 and 1969, people suffering from leprosy in Hawaii were forcibly removed to the leper colony on the island of Molokai. Today the leper colony is a national park and home to leprosy survivors. The colony is isolated below the highest sea cliffs in the world, with a drop of 1,010 meters. Reaching the colony entails a mule ride or hike down the cliffs following a 4.5-kilometer trail.

The trail provides a stunning view across the sea, and prior to the arrival of aircraft was the only way to reach the colony below. All supplies had to be brought in down the cliff, or on the occasional boat: to this day a large boat docks only once per year, carrying heavy items like televisions, refrigerators, or cars.

If you want to visit Kalaupapa today, taking a tour is mandatory. The small town at Kalaupapa is home to an aging population of leprosy survivors, many of whom have lived there for more than 50 years. The tour is run by a resident of Kalaupapa who survived leprosy and decided to remain.

Just seven years after the colony opened, the Norwegian scientist Gerhard Armauer Hansen isolated the bacterium responsible for leprosy: Mycobacterium leprae. It was the first bacterium shown to be responsible for a human disease. Shortly afterward, the German physician Robert Koch ...