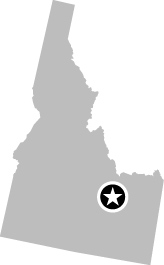 Think of Idaho, and potatoes are more likely to come to mind than nuclear reactors. However, the Idaho National Laboratory (INL), created in 1949, covers 2,300 square kilometers and has the largest concentration of nuclear reactors in the world: more than 50 reactors have been built on the site.

One of those reactors is the Experimental Breeder Reactor No. 1 (or EBR-1), the first nuclear reactor to produce electricity. Close to EBR-1 is the town of Arco, which boasts of being the first town powered by nuclear energy (for a few hours on July 17, 1955, Arco received its electricity from a reactor belonging to the INL). Arco doesn’t boast about being close to the site of the first major nuclear accident, though: on January 3, 1961, the Stationary Low-Power Plant Number 1 experienced a core meltdown, killing three workers who were so irradiated they were buried in lead coffins.

The most striking sight in the little town of Arco (population around 1,000) is the conning tower of the nuclear submarine USS Hawkbill, known as the Devil Boat because of the large 666 painted on ...