Get full access to The Manga Guide to Physics and 60K+ other titles, with free 10-day trial of O'Reilly. 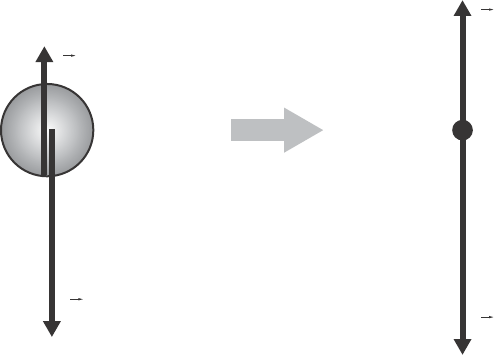 42 Chapter 1 Law of Action and Reaction
Let’s consider an object with volume, and how we can represent forces imposed on it.
In the case of a ball on my hand, the force of gravity is imposed on the center of the ball’s
mass (which also called the center of gravity). You can see in the diagram above that this
is where the force vector is acting. However, the upward force of my hand is acting on the
outside of the ball, as that is the point of contact. We’ll draw the force vector starting there
in our diagram.
But to simplify our calculations, we’ll treat this object as a mass without volume—that
is, a single point with mass. We’ll simplify all objects with volume similarly, as the calcula-
tions for objects with volume can become very complicated. A diagram that represents this
simplified free-body diagram is on the right. Bear in mind that we will simplify all the exam-
ples in this book in this way in our calculations, even if our diagrams appear more complex.
Expressing Newton’s Third Law with an Equation
To express the law of action and reaction in correct wording, we need a lengthy phrase like
“When an object impacts another object, both objects receive a force of the same magnitude
but in opposite directions.” So let’s try to express the law of action and reaction as a simple
equation instead. When object A imposes force F

AB
on object B and object B imposes force
F

BA
on object A, the law of action and reaction is expressed as follows:
F

AB
= −F

BA
So, you can express the law in a single equation, as shown above. In fact, comparing
the elements in this equation in terms of absolute values, you get:
| F

AB
| = | −F

BA
|
Now you can see that the action and the reaction are equivalent in magnitude, and the
minus sign tells you that their directions are opposite. Using equations can help you express
Newton’s laws in a simpler and more precise manner than verbal expression.
Ball
F
hand
F
gravity
Ball
F
hand
F
gravity 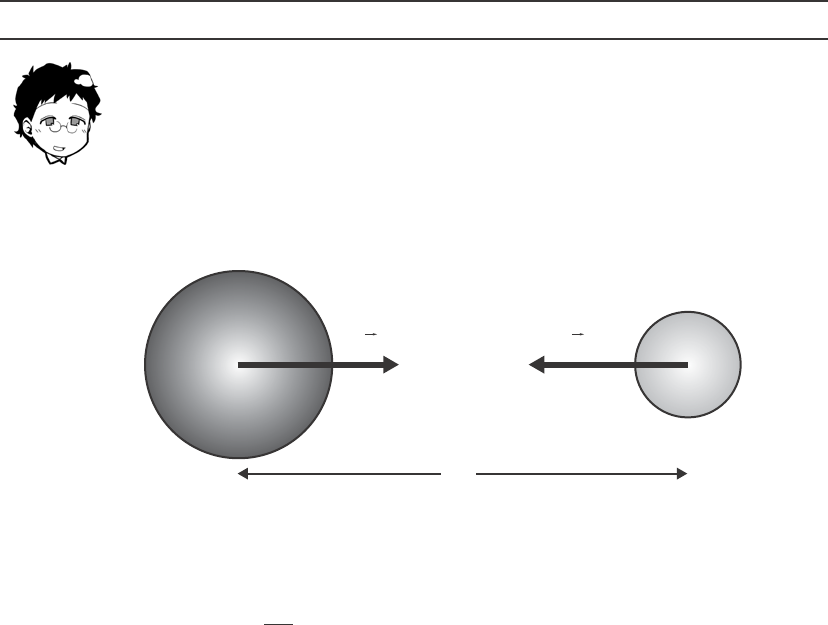 Gravity and Universal Gravitation 43
Gravity and Universal Gravitation
In the narrowest sense of the term, gravity is the force of the earth attracting objects toward
itself. But the force of the earth comes from universal gravitation between all objects of
mass, not just the earth itself. Between two objects, there is an attractive force proportional
to the product of the objects’ masses and inversely proportional to the distance between
them, raised to the second power. This attractive force is universal gravitation, as discovered
by Newton. It’s called universal gravitation because it works on all objects with mass—it’s not
affected by the type of object. Its value only depends on the mass of objects affecting each
other and the distance between them.
As shown in the figure, when two objects with mass M and mass m are separated from
each other by distance r, a force of F attracts the two objects. The equation is as follows:
G is a universal constant referred to as the universal gravitational constant:
G = 6.67 × 10
−11
(N × m
2
/kg
2
)
For an explanation of the unit newton (N), see page 92.
Universal gravitation satisfies the law of action and reaction, as it exerts a force on both
masses M and m. The equation above can be used to calculate the force on either object.
As their directions are obviously opposite, they satisfy the law of action and reaction. Thus,
we should note that forces working between objects at a distance from each other (not just
objects that come into contact with each other) also satisfy the law of action and reaction.
Universal gravitation is a very small force compared to electromagnetic force. While
electromagnetic forces may be attractive or repulsive depending on a combination of posi-
tive and negative charges, universal gravitation always works as attractive force—that is,
objects are always drawn closer to each other.
Because of universal gravitation, cosmic dust in outer space gathers into giant masses
over time—such as the earth or the other planets.
M
m
r
F −F
mM
r
2
F G =

Get The Manga Guide to Physics now with the O’Reilly learning platform.