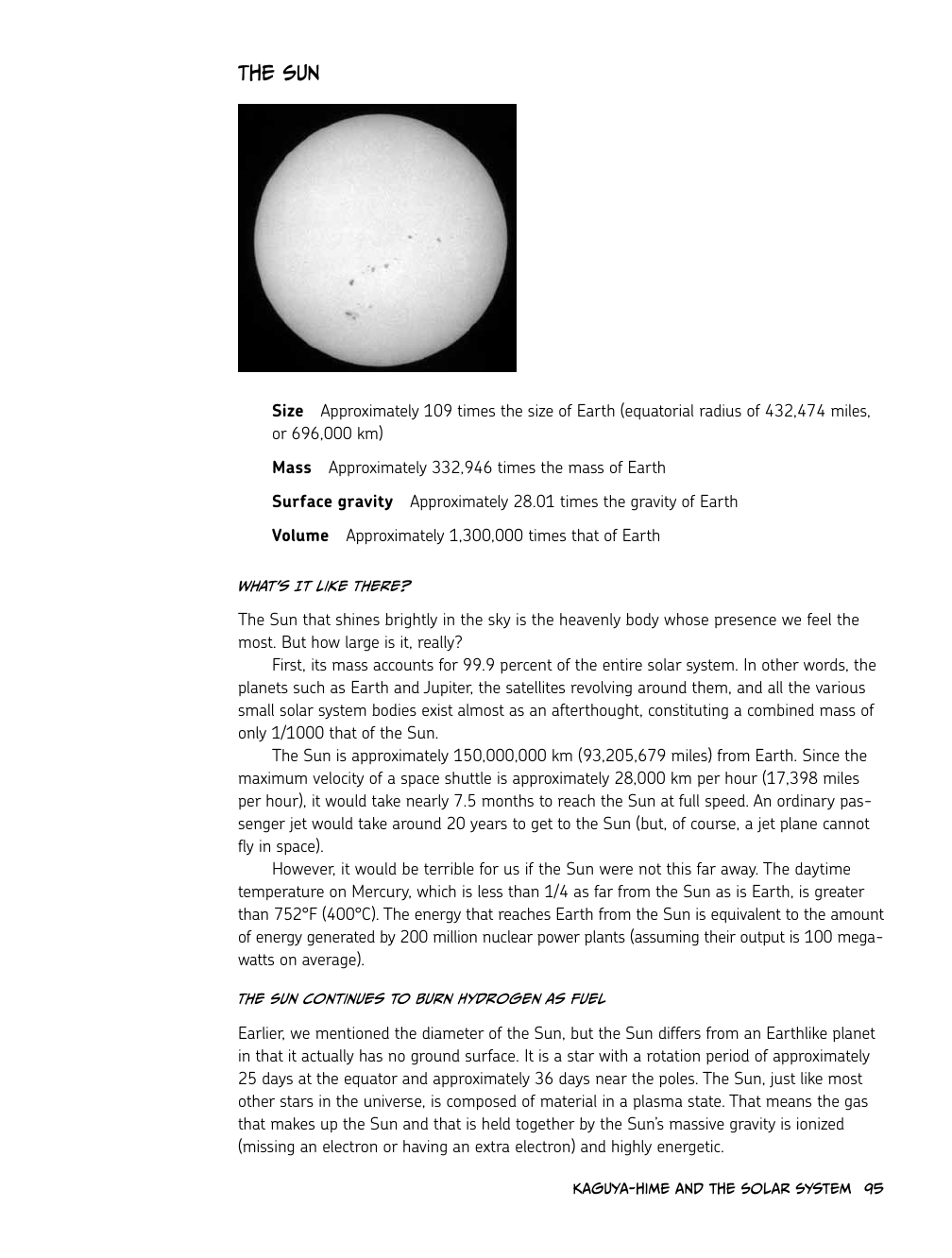 Kaguya-hime and the Solar System 95
The Sun
Size Approximately 109 times the size of Earth (equatorial radius of 432,474 miles,
or 696,000 km)
Mass Approximately 332,946 times the mass of Earth
Surface gravity Approximately 28.01 times the gravity of Earth
Volume Approximately 1,300,000 times that of Earth
What’s It Like There?
The Sun that shines brightly in the sky is the heavenly body whose presence we feel the
most. But how large is it, really?
First, its mass accounts for 99.9 percent of the entire solar system. In other words, the
planets such as Earth and Jupiter, the satellites revolving around them, and all the various
small solar system bodies exist almost as an afterthought, constituting a combined mass of
only 1/1000 that of the Sun.
The Sun is approximately 150,000,000 km (93,205,679 miles) from Earth. Since the
maximum velocity of a space shuttle is approximately 28,000 km per hour (17,398 miles
per hour), it would take nearly 7.5 months to reach the Sun at full speed. An ordinary pas-
senger jet would take around 20 years to get to the Sun (but, of course, a jet plane cannot
fly in space).
However, it would be terrible for us if the Sun were not this far away. The daytime
temperature on Mercury, which is less than 1/4 as far from the Sun as is Earth, is greater
than 752°F (400°C). The energy that reaches Earth from the Sun is equivalent to the amount
of energy generated by 200 million nuclear power plants (assuming their output is 100 mega-
watts on average).
The Sun Continues to Burn Hydrogen as Fuel
Earlier, we mentioned the diameter of the Sun, but the Sun differs from an Earthlike planet
in that it actually has no ground surface. It is a star with a rotation period of approximately
25 days at the equator and approximately 36 days near the poles. The Sun, just like most
other stars in the universe, is composed of material in a plasma state. That means the gas
that makes up the Sun and that is held together by the Sun’s massive gravity is ionized
(missing an electron or having an extra electron) and highly energetic.