Get full access to Visual Meetings: How Graphics, Sticky Notes and Idea Mapping Can Transform Group Productivity and 60K+ other titles, with free 10-day trial of O'Reilly.

Industrial Light & Magic, a division of Lucasfilm, is well-known for pioneering computer graphic visual effects. One day I received a call inviting me to facilitate a debrief of one of the movies they had just completed. It had been a challenge and they wanted all the different functions to share their learning so the next movie would benefit. We invented a template, shown here, that was the focus of the meeting and successfully guided a group of nearly 35 people in having a robust, two-hour dialogue about everything they learned. This kind of project review meeting is invaluable during the enactment stages of projects. 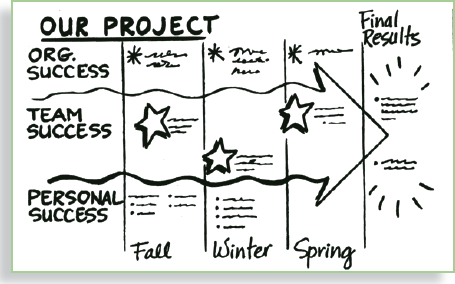 This template was invented to draw out all the learning from completion of a major film.

While I was there I had a chance to tour, and was struck by another visual tool that was central to how they managed the day-to-day operations at ILM. It consisted of a large display in a hallway near their studios. It had colored cards for every single project and which shoot was happening on what day. The cards contained some basic information about the project and the type of shoot, and was visually mapped against which studio it would be using. The wall showed the total utilization of the facilities at a glance. Projects logged in and out of the big wall almost like a time-card system. ...

Get Visual Meetings: How Graphics, Sticky Notes and Idea Mapping Can Transform Group Productivity now with the O’Reilly learning platform.