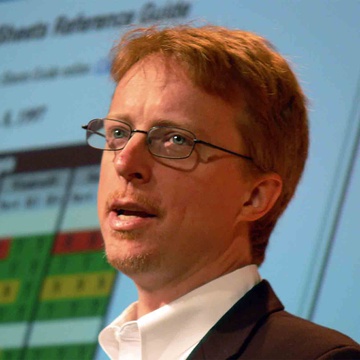 Eric A. Meyer has been a burger flipper, a college webmaster, an early blogger, one of the original CSS Samurai, a member of the CSS WG, a consultant and trainer, a Standards Evangelist at Netscape, and co-founded An Event Apart with Jeffrey Zeldman. He wrote CSS: The Definitive Guide for O’Reilly as well as several other books, has spoken at conferences the world over, created the first official W3C test suite, and assisted in the creation of microformats. In 2006, he was inducted into the International Academy of Digital Arts and Sciences for “international recognition on the topics of HTML and CSS” and helping to “inform excellence and efficiency on the Web.”

Eric lives with his family in Cleveland, Ohio, which is a much nicer city than you’ve been led to believe. He’s a staunch defender of the Oxford comma, the hard G in “GIF”, and the right of everyone everywhere to follow a sentence with however many spaces they deem proper. He enjoys a good meal whenever he can and considers almost every form of music to be worthwhile.

Now, after two long decades, we have actual layout systems coming to fruition.