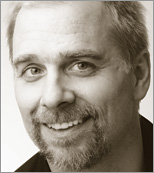 Check out dekePod, a video podcast series with Deke McClelland.

Electronic publishing pioneer Deke McClelland is a popular lecturer on Adobe Photoshop and the larger realm of computer graphics and design. He has hosted the interactive "Video Workshop" CD that shipped with Photoshop Versions 7, CS, and CS2, as well as hundreds of hours of tutorial-style video training for industry leaders lynda.com and Total Training. In addition to his video work, Deke has written 84 books translated into 24 languages, with more than 4 million copies in print.

One of the most award-winning writers in the technology market, Deke received the Benjamin Franklin Award for Best Computer Book in 1989. Since then, he has garnered more than 20 honors, including seven independent citations from the Computer Press Association. In 2002, he was inducted into the Photoshop Hall of Fame.

In 2004 Deke created the One-on-One™ book series, which uses video, step-by-step exercises, and hundreds of full-color illustrations to provide readers with the closest thing possible to private instruction from a recognized expert. These ambitious, self-paced guides include the bestselling Adobe Photoshop CS2 One-on-One and Adobe InDesign CS2 One-on-One. Late in 2006 Deke teamed up with vanguard online training company lynda.com to bring the One-on-One training strategy to a line of video products, beginning with Photoshop CS3 Beta One-on-One Preview, the first series available for the public beta of Photoshop CS3. In addition to the full 20-plus hour Photoshop CS3 One-on-One, his plans include Illustrator One-on-One and InDesign One-on-One. Among Deke's current lynda.com videos are Photoshop Elements 5 Essentials and the #1 ranked Photoshop CS2 Channels and Masks (available for immediate viewing at www.lynda.com/deke).

Deke is an Adobe Certified Expert, a member of the PhotoshopWorld Instructor Dream Team, and a regular speaker for the Photoshop Fling cruise seminars. Deke lives in Boulder, Colorado with his wife and two super-powered boys.

“This book is beautifully designed, and uses timeless typography techniques.... I enjoyed the subtle design details, such as how the figures are positioned on the page organically, and not always relegated strictly to the sidebar. Some of the large artistic figures even bleed off the page, which is unusual for a technical book. This type of graphic treatment makes the book feel more fun and magazine-like, and less like a technical software book.”

“Nice reading...It is very comprehensive and includes lots of material for beginner to intermediate users.”

“In Deke McClelland’s new book, you’ll find the perfect instruction manual. Instead of a laborious “this is the text tool, and when you click it, you can type text” method of instruction, you get practical real work examples. With plenty of illustrations and screen-shots, it’s easy for the beginner or the advanced Photoshop user to follow along and duplicate the results.”

“When it comes to Photoshop Deke McClelland is clearly the guru's guru.”

“..a powerful pick for any Photoshop user!”

“Are you an independent graphic artist, designer or digital photographer: professional or amateur? If you are, then this book is for you. Author Deke McClelland , has done an outstanding job of writing a book that walks you through Photoshop just as if he was teaching you in a classroom or in a corporate consulting environment.”

“I have enjoyed and profited from every Deke McClelland book/video package I have picked up. ”

“If you're already using Elements and need to explore more of the functions it offers, Deke's book illustrates some great ways to explore creativity with Photoshop Elements. ”

“Overall I was very much impressed with Photoshop CS4: The Missing Manual. I intend to keep it close at hand from now on.”

“All-in-all, this is a terrific offering from one of the top photoshop guru's. I highly recommend this book to anyone looking to expand their repertoire and learn new, time saving techniques in Adobe Photoshop.”

“This title will tell you everything you need to know about the creative and practical capabilities of Photoshop's channels and layer masks, all at your own pace, which makes it an invaluable resource. ”

“So this book seems the most current must-have, uthoritative source for learning all thing Channels and Masks. Deke has outdone himself on this one!”

“Tips & Tricks is a good step-by-step reference for common image editing chores that might be just beyond a patron’s grasp. ”

“As a classroom supplement, online course text or just a personal workbook, it can't be beat!”

“This practical and considerate title leaves little to chance, dissecting important features and functions into meticulous, bite-sized resources for readers to follow at their own pace. Essentially, this title will become an integrated training device to accompany your new software...”

“...All this makes it more than a book, its a multimedia experience where you can see the face and hear the voice of the author of this excellent Photoshop tutorial guide. Whether you're a beginner or a Photoshop pro, you're bound to pick up new tricks from using this book. ”

“I like to use two different book series to learn my software: the Classroom in a Book series from rival publisher Peachpit, and these one-on-one guides from O'Reilly. However, if you put me on an island and I just had a computer, software, and some books. I would choose the one-on-ones to bring with me. Mainly, because they have always had a much better method of teaching practical application of the software’s functionality rather than just teaching the interface. With books from Deke, you know you will leave with more than a handful of golden nuggets that will help you work with the software better, and faster.”