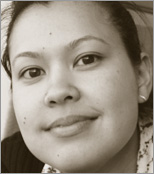 Tatiana Apandi is an associate editor at O'Reilly Media Inc., where she has worked since December 1998. As the eldest of three daughters and as a part-time battered women's counselor, she has always cared about ‘women's’ issues (though she tends to feel that what affects one member of society reflects on us all, but she will spare you that speech). She didn't think that her passion for helping to empower women could be joined with her career as an editor, until she created the O'Reilly Women in Technology: Hear Us Roar series, which aims to do just that.

Tatiana was a rape crisis counselor during her college years and has been a battered women's counselor for almost 8 years now. She believes strongly that while one person can change many things, having just a little support can go a very long way.