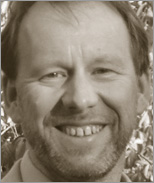 Julian Darley founded and ran a pioneering energy solutions organization, Post Carbon Institute, from 2003 to 2008. He is an Energy, Media & Social Analyst, film-maker, philosopher and writer, working on how civilization can transform itself sanely, safely - even cheerfully - into sustainability in the face of energy depletion, climate change and overshoot. Once Julian understood that in the end everything boils down to energy and that energy problems are the underlying cause of many of the ills that face our world, he has dedicated his life to helping society get off fossil fuels fast - and in a planned way, so that nature, in the shape of global oil decline and climate change, doesn't get there first.

Understanding energy in general, and peak oil in particular, helps us see that much of the "progress" made in the last few centuries has come from an increase in overall energy consumption. As the supply of oil (and natural gas in many places) starts to decline, how is our technological society going to adapt and cope with that ever-reducing supply of cheap and easy energy? In addition, how is society going to ensure that the energy that we do use is clean and green, given the threat of global warming? Julian is an evangelist in the "what can we do" field. He has founded many practical programs aimed at helping people deal with energy and climate problems, including the Relocalization Network, SolarCarShare and the Energy Farms & Gardens network.

Julian Darley is the author of High Noon for Natural Gas: the New Energy Crisis (Chelsea Green, 2004). He has an MSc in Environment and Social Research from the University of Surrey in the UK, an MA in Journalism and Communications from the University of Texas at Austin, has studied philosophy, Latin & Greek in Rome (whilst translating for the Vatican), and has a BA in Music & Russian. As a boy maker of synthesizers and radio control devices he expected to become an electronics engineer. He has been online since 1990 (with Compuserve!), and was a software developer right as the dot-com era became dot bomb - just in time to found his own Internet broadcasting station, GlobalPublicMedia.com - which is still online today. Julian is an ex-pat Brit who now lives in the Bay Area of California, with his wife, Post Carbon co-founder Celine Rich and young son, Raphael Rex (almost four) - already a budding gardener and maker.