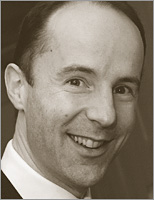 Tim Bunce is best known as the author and maintainer of the Perl DBI module, the standard database interface for Perl since 1994. He has contributed to the development of the Perl language and many of its core modules since 1994, and was responsible for the 5.4.x series of maintenance releases.

As the founder and CTO of Data-Plan Services, he provides Perl, database, performance, and scaling consultancy services to an international client base. Prior to that we was Technical Director (CTO) of IG in the UK where he was awarded by British Telecom for his role in the rapid development of their Call Management Information service, a system implemented in Perl.

He is co-author, along with Alligator Descartes, of Programming the Perl DBI, the definitive book on DBI, published by O�Reilly Media.

A popular and effective speaker, he has delivered tutorials and sessions for many years at OSCON and other conferences and workshops.

He lives, with his wife and two daughters, on the west coast of Ireland.