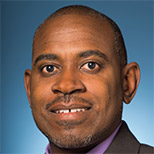 Greene joined Intel in 1990, after graduating from the Massachusetts Institute of Technology and has managed and led several new product developments, research efforts, and engineering groups. He has served as Intel’s initiative owner for power efficiency, pre silicon software development, and has driven new technology benchmarking throughout his career.

Outside Intel, Greene serves on the National GEM Consortium’s (GEM) Executive Committee as the Marketing Vice President. GEM is a national non-profit providing programming and full fellowships to support the number of under-represented individuals who pursue a master’s or doctorate degree in science or engineering.