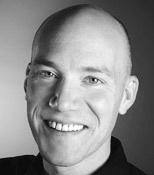 Ron has a successful history building engineering and data science teams to transform businesses using technology. He is a master of using open source technologies to generate value from Big Data and often speaks on the topic in addition to his favorite topics Hadoop, Storm and NoSQL.

Prior to the joining Think Big, Bodkin was Vice President of Engineering at Quantcast where he led the data science and engineer teams that pioneered the use of Hadoop and NoSQL for batch and real-time decision-making. Prior to that, Bodkin was Founder of New Aspects, which provided enterprise consulting for Aspect-oriented programming. Bodkin was also Co-Founder and CTO of B2B applications provider C-Bridge, which he led to team of 900 people and a successful IPO.

Bodkin graduated with honors from McGill University with a B.S. in Math and Computer Science. Bodkin also earned his Master's Degree in Computer Science from MIT, leaving the PhD program after presenting the idea for C-bridge and placing in the finals of the 50k Entrepreneurship Contest.

Webcast: Integrating Apache Spark and NiFi for Data Lakes November 10, 2016 This webcast will introduce Kylo, a soon-to-be-open-source data lake orchestration framework based on Apache Spark and NiFi.
Webcast: Continuous Applications: Spark, Kafka, Beam, and Beyond March 24, 2016 In this webcast, we look at options for building complex analytic big data applications including tradeoffs for simplicity, completeness, and changing semantics over time backed by rich query engines.