At Next:Economy 2016, business leaders, policy makers, and technologists charted a course from the economy we experience today to an economy that brings prosperity to all. 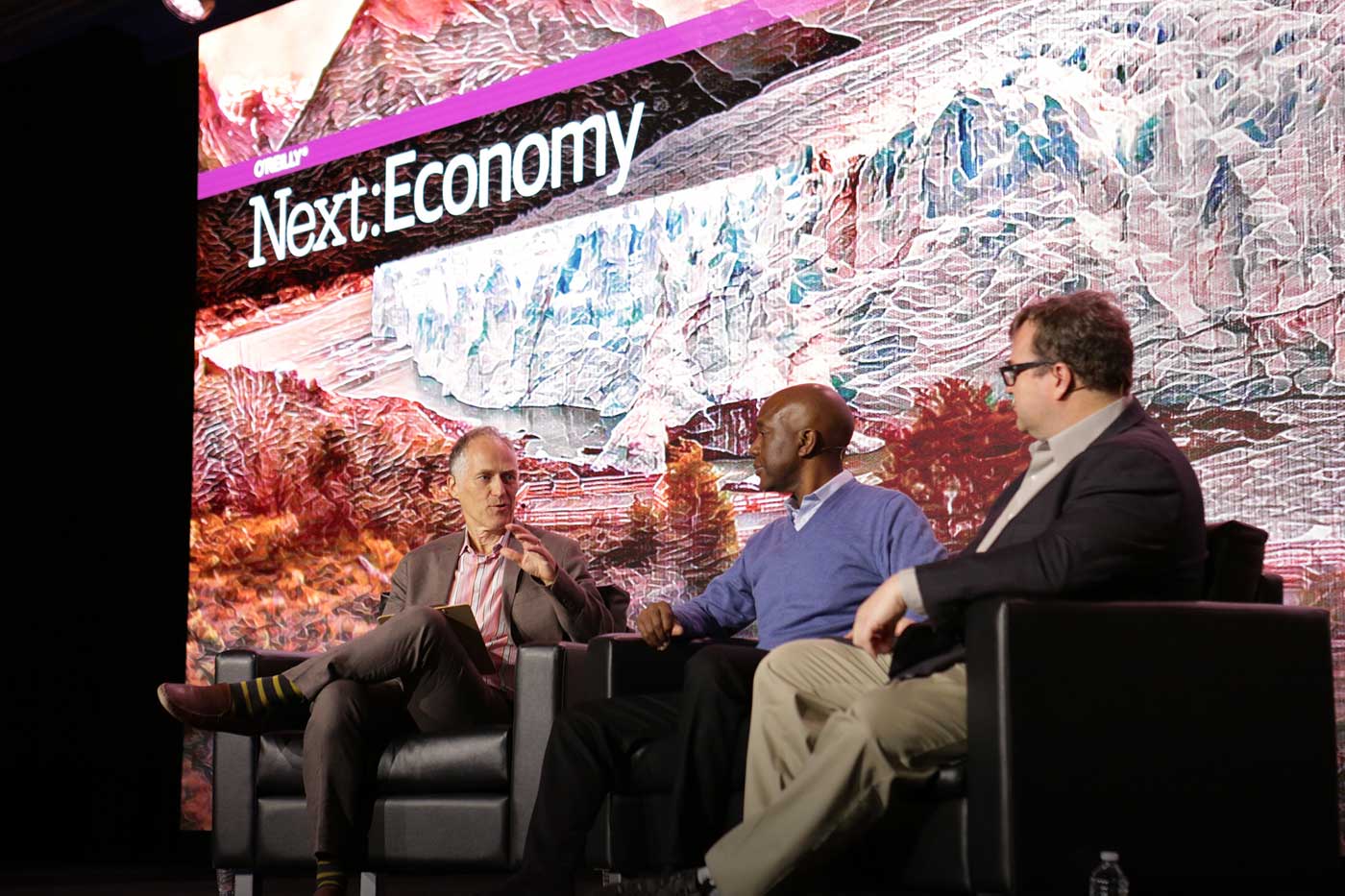 Visit Safari for full access to sessions, training, and keynotes from this event.

Business leaders, policy makers, and technologists came together in San Francisco for the O’Reilly Next:Economy Summit 2016. Below you’ll find links to highlights from the event.

A conversation with Jeff Weiner

LinkedIn CEO Jeff Weiner discusses what LinkedIn can show us about better matching supply and demand in key skills.

Our world in data

Graphs and maps from Max Roser’s Our World in Data have become a fixture on social media and in thoughtful conversations around the world. Roser reminds us that if we play our cards right, the future is still bright.

Is it time for a universal basic income?

Natalie Foster of the Aspen Institute hosts a conversation with Andy Stern, author of Raising the Floor, and Elizabeth Rhodes, who is heading up Y Combinator’s new universal basic income experiments.

Grail: A conversation with Jeff Huber

Jeff Huber, CEO of Grail, explains why investors are betting that genomics and computation will create whole new industries.

The Information: A conversation with Jessica Lessin

Jessica Lessin outlines the business model behind The Information and explains why she wants to build a business that lasts.

Throwing rocks at the Google bus: A conversation with Douglas Rushkoff

Douglas Rushkoff outlines a way forward to a local, circular economy, where money stays in a community and helps us build a more human-centered society.

Jack Conte, musician and co-founder of Patreon, talks about crowdsourced patronage and how it’s providing steady income for creative professionals.

Liquid marketplaces are a big part of the future of work, and Thumbtack founder and CEO Marco Zappacosta has gone after an often invisible sector that is essential to the functioning of modern society.

Making a market in status

James Nord of Fohr Card shows us how the reputation gained through social media gets traded or converted into cash.

The augmented city: A conversation with John Hanke of Niantic, creator of Pokémon GO

Niantic founder and CEO John Hanke talks about his motivations in creating the Pokémon GO app and what it teaches us about the future of entertainment.

How Jeff Smith built an agile culture at IBM

Since he was tapped as IBM’s CIO in 2014, Jeff Smith has been playing a second key role: transforming IBM’s software development culture to one that mirrors the Agile approach that characterizes today’s Silicon Valley startups.

Aging with honor: A conversation with Seth Sternberg and Phaedra Ellis-Lamkins

Honor is using modern technology to solve a real, vexing problem for those whose loved ones need special care.

Makers and takers: A conversation with Rana Foroohar

The real-time business: A conversation with Hilarie Koplow-McAdams

New Relic president Hilarie Koplow-McAdams talks about data-driven business and why data is a team sport.

The story behind John Basset III’s family furniture company proves the destruction of good jobs is not inevitable.

Paul English’s vision of pairing AI and human expertise has much to teach us about how to do business in the future.

Matt Jorgensen offers a look at Josephine, a platform that connects consumers with home cooks.

A conversation with David Kenny, general manager at IBM Watson

IBM’s Watson is helping doctors, insurance companies, accountants, lawyers, and others. David Kenny discusses how in each of these cases, Watson acts as an assistant rather than an opponent.

Bots in the enterprise

Silicon Valley entrepreneurs building bot companies demonstrate their bots and show you how you can use them to empower your staff.

Bryce Roberts explores Indie.vc-style startups and why they might be more important to the economy than traditional Silicon Valley startups.

Google DeepMind’s deep learning approach produces surprising results, demonstrating not just vast recall or the ability to compute faster than any human, but what many people would consider real creativity.

Sara Holoubek’s Human Company Manifesto is one of the seminal documents of the Next Economy. She outlines its tenets in this talk.

Joshua Browder has been working to replace exploitative lawyers—mainly the ones charging hundreds of dollars for copying and pasting documents—with chatbots.