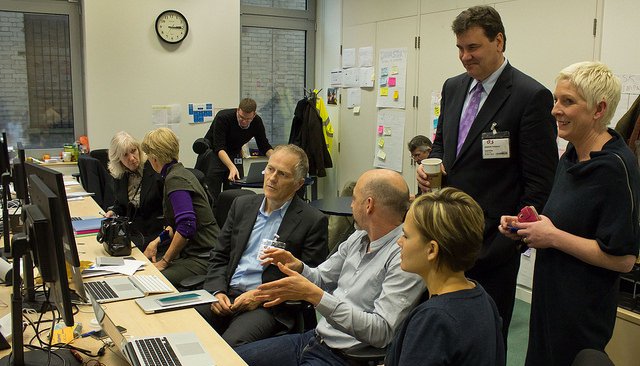 Despite having invented many of the foundations of modern computing, Alan Turing was convicted of indecency and eventually took his own life. The torch of the computer revolution passed to the Institute for Advanced Studies and other pioneers in the U.S. When Tim Berners-Lee invented the World Wide Web, he was given a knighthood, but nonetheless ended up at MIT rather than at Cambridge or Oxford.

Now, Britain is at it again. The U.K. Government Digital Service, hailed and emulated around the world as among the most innovative and successful approaches to bringing government into the 21st century, is the target of senior civil servants who seek to break it up and reduce its ability to transform business as usual. Since the initial news, the story has been confirmed by the departure of GDS head Stephen Foreshew-Cain and commentary on the “coup” from a former insider.

Let’s be clear. There are plenty of reasons to break up and disempower the Government Digital Service—if you’re a vendor who benefits from a system where IT projects routinely cost hundreds of times what they ought, take years longer, and often fail completely. But if you’re a civil servant charged with maximizing the public good, this is a very, very poor idea.

GOV.UK, the site built by the Government Digital Service, replaced thousands of fragmented websites with a single service that has had more usage by citizens than all of the sites it replaced, won plaudits for its ease of use, and saved HMS government over 60 million pounds last year alone. The GDS approach of iterative, data-driven, user-centric design results in services that actually work, are delivered on time, and increase citizens’ satisfaction with their government.

Other countries know a good thing when they see it!

The work of the GDS was the direct inspiration for the United States Digital Service (USDS), the unit that was established to continue the work of the team that rescued healthcare.gov, and with it, the signature policy achievement of the Obama administration.

The plans for the USDS were already well underway when the healthcare.gov crisis drove home the value of a central team of technologists within government, with the power not just to direct technology policy but actually to implement key systems. My wife, Jennifer Pahlka, had accepted U.S. Chief Technology Officer Todd Park’s offer to become his deputy, on condition that she be allowed to draw up plans to create a service modeled on the U.K.’s Government Digital Service. And Ezra Klein’s Bloomberg Business Week cover story contrasting the healthcare.gov failure with the work of the GDS drove the point home. President Obama himself acknowledged the inspiration of the U.K. Government Digital Service in a letter to GDS founder Mike Bracken after Bracken stepped down.

The USDS and 18F, a sister group set up at the same time at the General Services Administration, have been having a huge impact here in the U.S. by following the GDS playbook. The USDS Digital Services Playbook closely follows the U.K. GDS Design Principles and Digital Service Standard. And these efforts are not just saving taxpayers money, they’re saving lives and rebuilding trust and faith with the American public.

And it’s not just in America that the GDS effect is taking hold. The Australian Digital Transformation Office is run by an ex-GDS leader, and its service standard and principles pay homage to GDS. New Zealand, Israel, Mexico, and several other countries are following suit. And yet, despite having a global success story on its hands, the forces of conservatism in the British system appear to want to break up GDS.

According to the article in Computer Weekly that lays out the plans to roll back the authority of the GDS, the intent is “to break up GDS and return to the sort of model that existed before the 2010 general election, where a much smaller central policy team was responsible for strategy and standards, with all delivery returned to Whitehall departments.” This is a serious mistake. It is indeed essential to get the departments involved, but they must not return to the pre-2010 practice of outsourcing IT to vendors rather than building the internal delivery capability that keeps vendors honest and makes sure that the government itself has the ability to deliver on key services.

Rather, the central GDS should be maintained with its current funding, and its digital services playbook copied by the departments. The role of the GDS should not be replaced by work in the departments, but augmented by departmental Digital Services that work closely with the central coordinating team. The central team is essential, because government needs not just common standards, but common, re-usable implementation of key platform technologies. Otherwise, each department tends to recreate the wheel.

This is a key lesson that the US has applied, building not just central services in USDS and 18F, but also departmental digital services at each of the major agencies. Even the Veterans Administration, so broken for so long that many had given up on it, has started to turn around by implementing these digital best practices, which differ fundamentally from conventional government IT practices. For example, the VA recently announced they’d revamped the online application form for healthcare for veterans because the previous one literally did not open for most users. The VA’s post about how they made the new application a success was unequivocal: “prioritize users, and engage them early and often.” If that sounds a lot like the first several points of the GDS’s Digital Service Standard, that’s not a coincidence. The Departments of Health and Human Services, Education, Homeland Security, and many others all have similar stories, and they’re starting to add up to something big enough to be the new normal. This is thanks, in no small part, to the example and frequent guidance and support from GDS leadership and staff over the past few years.

Fortunately, the British have only started the process to dismantle and disempower the GDS, by removing its respected delivery leader, Stephen Foreshew-Cain, and by disposing with digital leaders in its biggest departments, folding them back under CIOs and the Big IT crowd. There is still time for the new U.K. government to reconsider, but it will need strong political leadership. They should double down on the enormous gains that the GDS has already made in modernizing government IT instead of throwing away their advantage and looking on in envy as other nations finish what they started.