Caption this, with TensorFlow

How to build and train an image caption generator using a TensorFlow notebook. 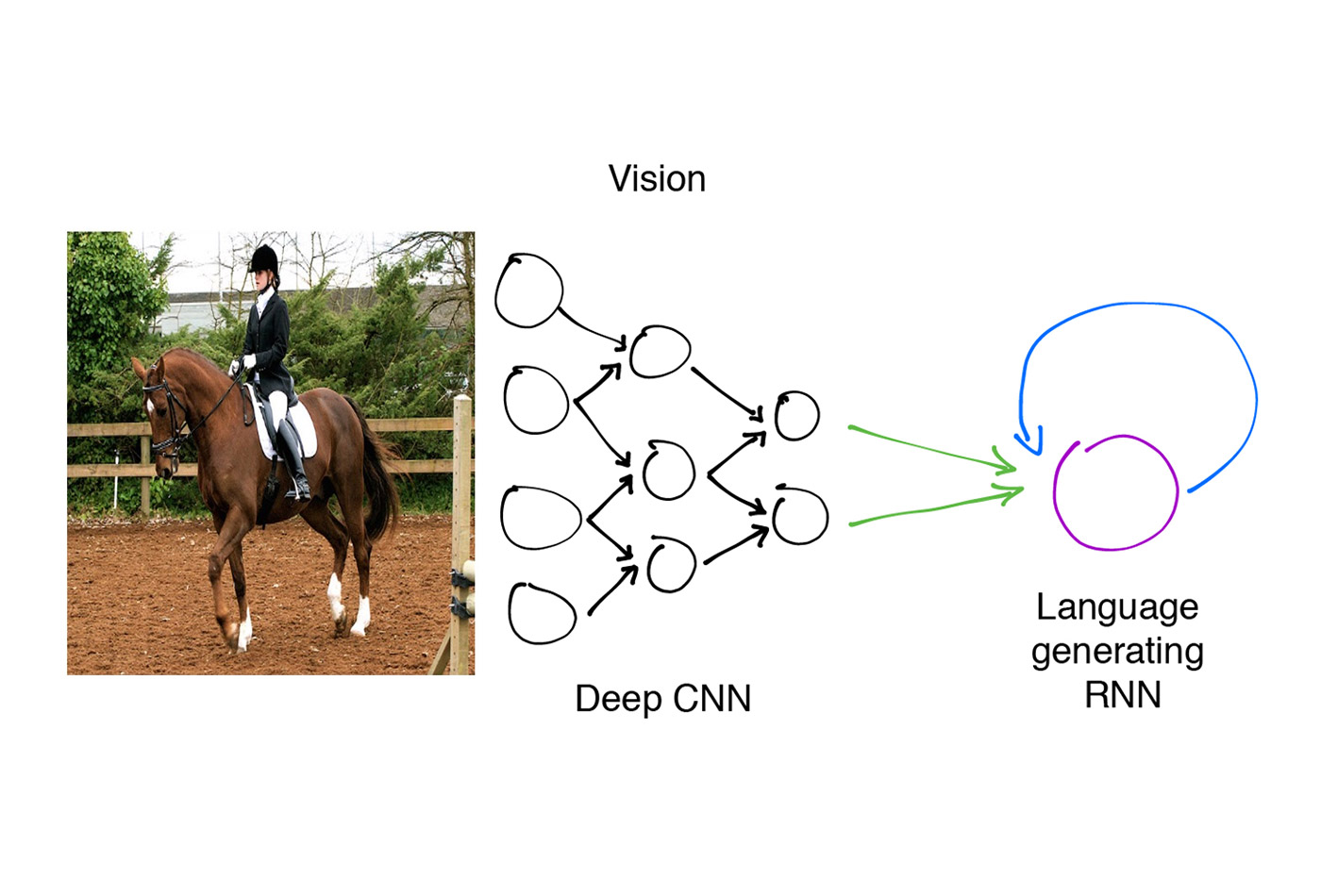 Attention readers: We invite you to access the corresponding Python code and iPython notebooks for this article on GitHub.

In this article, we will walk through an intermediate-level tutorial on how to train an image caption generator on the Flickr30k data set using an adaptation of Google’s Show and Tell model. We use the TensorFlow framework to construct, train, and test our model because it’s relatively easy to use and has a growing online community.

Recent successes in applying deep neural networks to computer vision and natural language processing tasks have inspired AI researchers to explore new research opportunities at the intersection of these previously separate domains. Caption generation models have to balance an understanding of both visual cues and natural language.

The intersection of these two traditionally unrelated fields has the possibility to effect change on a wide scale. While there are some straightforward applications of this technology, such as generating summaries for YouTube videos or captioning unlabeled images, more creative applications can drastically improve the quality of life for a wide cross section of the population. Similar to how traditional computer vision seeks to make the world more accessible and understandable for computers, this technology has the potential to make our world more accessible and understandable for us humans. It can serve as a tour guide, and can even serve as a visual aid for daily life, such as in the case of the Horus wearable device from the Italian AI firm Eyra.

Before we begin, we’ll need to do some housekeeping.

First, you will need to install Tensorflow. If this is your first time working with Tensorflow, we recommend that you first review the following article: Hello, TensorFlow! Building and training your first TensorFlow model.

You will need the pandas, opencv2, and Jupyter libraries to run the associated code. However, to simplify the install process we highly recommend that you follow the Docker install instructions on our associated GitHub repo.

You will also need to download the image embeddings and image captions for the Flickr30k data set. Download links are also provided on our GitHub repo.

At a high-level, this is the model we will be training. Each image will be encoded by a deep convolutional neural network into a 4,096 dimensional vector representation. A language generating RNN, or recurrent neural network, will then decode that representation sequentially into a natural language description.

Caption generation as an extension of image classification

Image classification is a computer vision task with a lot of history and many strong models behind it. Classification requires models that can piece together relevant visual information about the shapes and objects present in an image, to place that image into an object category. Machine learning models for other computer vision tasks such as object detection and image segmentation build on this by not only recognizing when information is present, but also by learning how to interpret 2D space, reconcile the two understandings, and determine where an object’s information is distributed in the image. For caption generation, this raises two questions:

We can take advantage of pre-existing models to help caption images. Transfer learning allows us to take the data transformations learned by neural networks trained on different tasks and apply them to our data. In our case, the VGG-16 image classification model takes in 224×224 pixel images and produces a 4,096 dimensional feature vector useful for categorizing images.

We can take the representation (known as the image embedding) from the VGG-16 model and use it to train the rest of our model. For the scope of this article, we have abstracted away the architecture of VGG-16 and have pre-computed the 4,096 dimensional features to speed up training.

Now that we have an image representation, we need our model to learn to decode that representation into an understandable caption. Due to the serial nature of text, we leverage recurrence in an RNN/LSTM network (to learn more, read “Understanding LSTM Networks“). These networks are trained to predict the next word in a series given previous words and the image representation.

Long short-term memory (LSTM) cells allow the model to better select what information to use in the sequence of caption words, what to remember, and what information to forget. TensorFlow provides a wrapper function to generate an LSTM layer for a given input and output dimension.

To transform words into a fixed-length representation suitable for LSTM input, we use an embedding layer that learns to map words to 256 dimensional features (or word-embeddings). Word-embeddings help us represent our words as vectors, where similar word-vectors are semantically similar. To learn more about how word-embeddings capture the relationships between different words, check out “Capturing semantic meaning using deep learning.”

Building and training the model

All together, this is what the Show and Tell Model looks like:

In this diagram, {s0, s1, …, sN} represent the words of the caption we are trying to predict and {wes0, wes1, …, wesN-1} are the word embedding vectors for each word. The outputs {p1, p2, …, pN} of the LSTM are probability distributions generated by the model for the next word in the sentence. The model is trained to minimize the negative sum of the log probabilities of each word.

After training, we have a model that gives the probability of a word appearing next in a caption, given the image and all previous words. How can we use this to generate new captions?

The simplest approach is to take an input image and iteratively output the next most probable word, building up a single caption.

One possible way to circumvent this is by using a method called “Beam Search.” The algorithm iteratively considers the set of the k best sentences up to length t as candidates to generate sentences of size t + 1, and keeps only the resulting best k of them. This allows one to explore a larger space of good captions while keeping inference computationally tractable. In the example below, the algorithm maintains a list of k = 2 candidate sentences shown by the path to each bold word for each vertical time step.

The neural image caption generator gives a useful framework for learning to map from images to human-level image captions. By training on large numbers of image-caption pairs, the model learns to capture relevant semantic information from visual features.

Also, if we actually look closely at the captions generated, we notice that they are rather mundane and commonplace. Take this possible image-caption pair for instance:

This is most certainly a “giraffe standing next to a tree.” However, if we look at other pictures, we will likely notice that it generates a caption of “a giraffe next to a tree” for any picture with a giraffe because giraffes in the training set often appear near trees.

First, if you want to improve on the model explained here, take a look at Google’s open source Show and Tell network, trainable with the MS COCO data set and an Inception-v3 image embedding.

Current state-of-the-art image captioning models include a visual attention mechanism, which allows the model to identify areas of interest in the image to selectively focus on when generating captions.

Also, if you are interested in this state-of-the-art implementation of caption generation, check out the following paper: Show, Attend, and Tell: Neural Image Caption Generation with Visual Attention.

Note: Don’t forget to access the corresponding Python code and iPython notebooks for this article on GitHub!