Get full access to Active Directory, 5th Edition and 60K+ other titles, with free 10-day trial of O'Reilly.

Each of these naming contexts represents a different type of Active Directory data. The Configuration NC holds data pertaining to the configuration of the forest (or of forest-wide applications), such as the objects representing naming contexts, LDAP policies, sites, subnets, Microsoft Exchange, and so forth. The Schema NC contains the set of object class and attribute definitions for the types of data that can be stored in Active Directory. Each domain in a forest also has a Domain NC, which contains data specific to the domain—for example, users, groups, computers, etc.

You can retrieve a list of the naming contexts and application partitions a specific domain controller maintains by querying its RootDSE entry. You can view the RootDSE attributes by opening the LDP utility. To see how to view the RootDSE information, see the sidebar Querying RootDSE with LDP.

The RootDSE is viewable by anonymously binding to any domain controller in the forest. The steps to use LDP to view this information are:

There is a great deal of data displayed in this screen, and we will not cover it all at this time. A good deal of the information will be covered throughout this book when it is relevant. The information of particular interest to us right now is the data corresponding to the attributes in Table 4-1.

This output is particularly useful when writing scripts and programs that query Active Directory. By utilizing the RootDSE attributes, you can avoid hardcoding paths into your code. 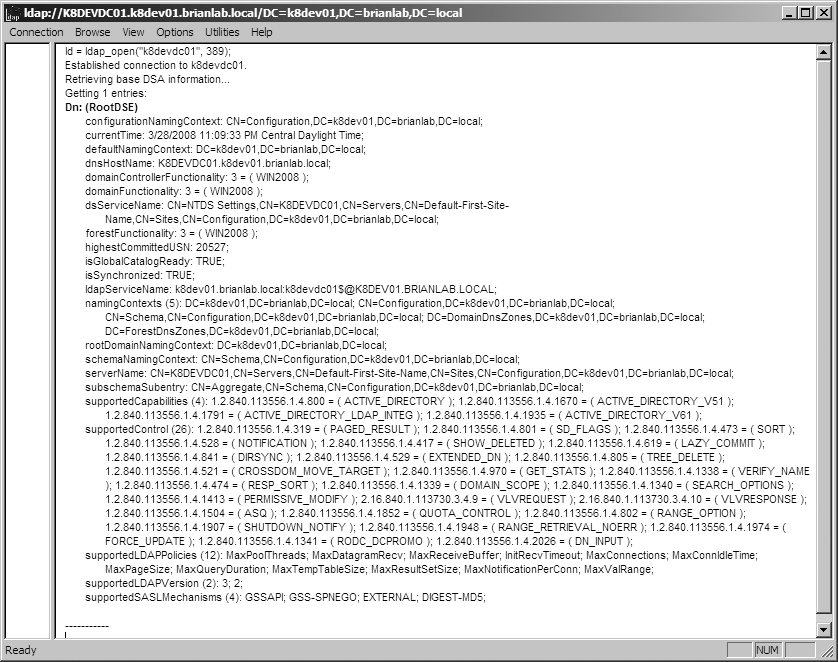 In this chapter, we will review each of the three predefined naming contexts and describe the data contained within each, and then cover application partitions and sample uses of them.

Each Active Directory domain has a Domain naming context, which contains domain-specific data. The root of this NC is represented by a domain’s distinguished name (DN) and is typically referred to as the NC head. For example, the mycorp.com domain’s DN would be dc=mycorp,dc=com. Each domain controller in the domain replicates a copy of the Domain NC.

Table 4-3 contains a list of the default top-level containers found in the Configuration NC.

You may be wondering why the schema isn’t just contained within the Configuration NC. As we discussed in Chapter 2, there is a schema master FSMO role that is the single master for updates to schema objects. This role is necessary due to the highly sensitive nature of the schema. Schema modifications need to be processed prior to any updates that utilize the schema. The mechanism to most easily guarantee this with the replication model AD uses is to put the schema into its own partition so it can replicate separately prior to other changes.

Chapters 5 and 17 deal with the schema in more depth.

There are a few limitations to be aware of regarding application partitions:

Here are the steps required to create the application partition:

Here’s how to add the dc02 replica:

Application partitions tend to store dynamic data—that is, data that has a limited lifespan (see the section on Storing Dynamic Data for more on this). Dynamic data from network services such as DNS and the Dynamic Host Configuration Protocol (DHCP) can reside in an application partition in AD. This allows uniformity of access from applications via a single methodology, which in turn enables developers to write to a special area only available on specific servers rather than into a domain partition that is replicated to every DC. In fact, application partitions could allow multiple versions of COM+ applications to be installed and configured on the same computer, resulting in more cost-effective management of server applications.

The availability of Active Directory Lightweight Directory Services (AD LDS) has given administrators another option for storing directory data outside of the normal domain-naming contexts while still using Windows security and authentication. Instead of putting application data in an application partition, you can place that data in a dedicated AD LDS instance. This allows you to offload administrative control of that information to application owners or other administrators, as well as lessening the chance of an application negatively impacting a domain controller’s primary NOS function. We discuss AD LDS specifics in Chapter 20.

Although application partitions give administrators more control over how to replicate application data, the problem of data cleanup still exists. That is, applications that add data to Active Directory are not always good about cleaning it up after it is no longer needed. That’s why the ability to create dynamic data was also added as a feature in Windows Server 2003 Active Directory. Dynamic objects are objects that have a time-to-live (TTL) value that determines how long they will exist before being automatically deleted by Active Directory. Dynamic objects typically have a fairly short lifespan (i.e., days or less). An example use of dynamic objects is an ecommerce website that needs to store user session information temporarily. Because a directory is likely going to be where the user profile information resides, it can be advantageous to use the same store for session-based information, which is generally short-lived. The default TTL that is set for dynamic objects is 1 day, but can be configured to be as short as 15 minutes.

The default TTL and minimum TTL can be modified by changing the DynamicObjectDefaultTTLSeconds and DynamicObjectMinTTLSeconds values in the ms-DS-Other-Settings attribute of the CN=DirectoryService,CN=WindowsNT,CN=Services,CN=Configuration,DC=... object.

To create a dynamic object, you simply have to add dynamicObject to the objectClass attribute when creating the object. Microsoft has specifically disabled the ability to add this to existing objects for safety reasons. This is why you cannot convert existing static objects into dynamic objects. The entryTTL attribute can also be set at creation time to set the TTL to something other than the one-day default. To prevent a dynamic object from being automatically deleted, you can “refresh” the object by resetting the entryTTL attribute for the object to a new TTL value (time specified in seconds).

Dynamic objects do not get tombstoned like normal objects when they are deleted; they are just removed from the directory. A tombstone is not needed since the TTL mechanism allows them to be immediately removed from all domain controllers simultaneously. For more information on tombstones, see the section Preserving attributes in a tombstone in Chapter 5.

In this chapter, we covered how objects are grouped at a high level into naming contexts and application partitions, which are used as replication boundaries. The Domain NC contains domain-specific data such as users, groups, and computers. The Configuration NC contains forest-wide configuration data such as the site topology objects and objects that represent naming contexts and application partitions. The Schema NC contains all the schema objects that define how data is structured and represented in Active Directory.

Application partitions provide a way for administrators to define their own groupings of objects and, subsequently, replication boundaries. Storage of DNS data for AD-integrated DNS zones is the classic example of when it makes sense to use application partitions due to the increased control they give you over which domain controllers replicate the data. Dynamic objects allow you to create objects that have a TTL value. After the TTL expires, Active Directory automatically deletes the object.