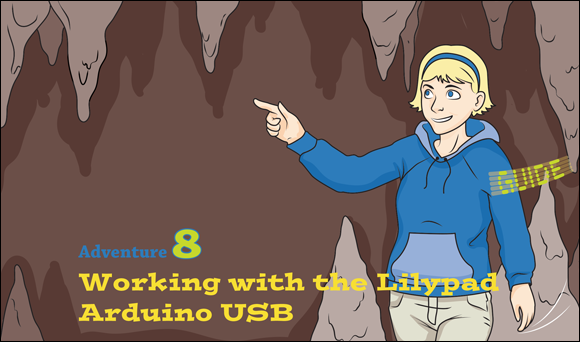 YOU HAVE ONLY just begun to explore all the different ways to make a project with an Arduino! In Adventure 7 you learned how to design and build your own game controller using the Arduino Leonardo. The Arduino board still looked exactly like an Arduino Uno, however, and you still built circuits the same way you would build your circuit for an Arduino Uno project—using breadboards, wire and solder.

But what if, for example, you wanted to build an Arduino project that you could wear? You can’t use stiff wires and hard solder if you want something to bend like fabric and be comfortable to wear. Luckily, conductive metals can be made into thread, which means you can sew a circuit with a needle and (conductive) thread. It’s called making a soft circuit. And there’s a particular type of Arduino board that has been built to make it easy to sew a microcontroller into your project: the Lilypad Arduino USB!

In this adventure you’re going to create a hoodie with an Arduino and LEDs embedded in its sleeve. The LEDs will display a secret message that you program into your Lilypad Arduino USB. The secret message is stored on the Lilypad Arduino USB using arrays, so before you start writing the code for this adventure’s project, I remind you how arrays work and show you how to push them to a second dimension.

You need the components shown in Figure 8-1 for the first part of this ...