Algorithms in a Nutshell by

Get full access to Algorithms in a Nutshell and 60K+ other titles, with free 10-day trial of O'Reilly.

Counting Sort succeeds by constructing a much smaller set of k values in which to count the n elements in the set. Given a set of n elements, Bucket Sort constructs a set of n buckets into which the elements of the input set are partitioned; Bucket Sort thus reduces its processing costs at the expense of this extra space. If a hash function, hash(Ai), is provided that uniformly partitions the input set of n elements into these n buckets, then Bucket Sort as described in Figure 4-18 can sort, in the worst case, in O(n) time. You can use Bucket Sort if the following two properties hold:

The input data must be uniformly distributed for a given range. Based on this distribution, n buckets are created to evenly partition the input range.

The buckets must be ordered. That is, if i<j, then elements inserted into bucket bi are lexicographically smaller than elements in bucket bj. 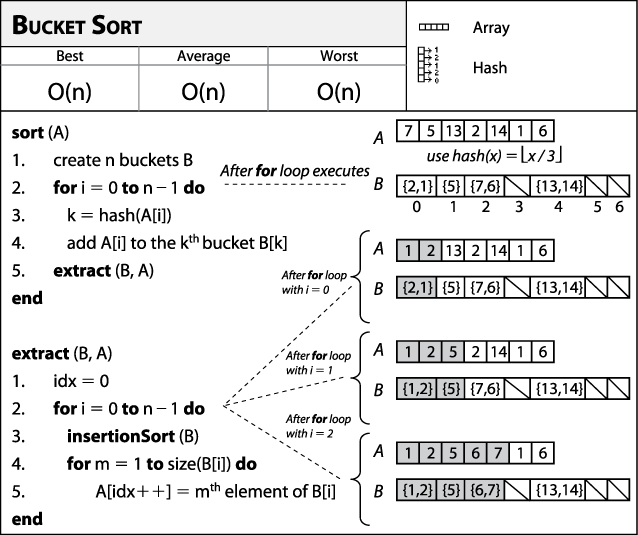 Bucket Sort is not appropriate for sorting arbitrary strings, for example; however, it could be used to sort a set of uniformly distributed floating-point numbers in the range [0,1).

Bucket Sort is the fastest sort when the elements to be sorted can be uniformly partitioned using a fast hashing function.

If storage space is not important and the elements admit to an immediate total ordering, Bucket Sort can take advantage of this extra knowledge for impressive cost savings.

In the C implementation for Bucket Sort, shown in Example 4-11, each bucket stores a linked list of elements that were hashed to that bucket. The functions numBuckets and hash are provided externally, based upon the input set.

For numbers drawn uniformly from [0,1), Example 4-12 contains sample implementations of the hash and numBuckets functions to use.

The buckets could also be stored using fixed arrays that are reallocated when the buckets become full, but the linked list implementation is about 30-40% faster.

As the values are extracted from the buckets and written back into the input array, Insertion Sort is used when a bucket contains more than a single element. For Bucket Sort to exhibit O(n) behavior, we must guarantee that the total time to sort each of these buckets is also O(n). Let's define ni to be the number of elements partitioned in bucket bi. We can treat ni as a random variable (using statistical theory). Now consider the expected value E[ni] of ni. Each element in the input set has probability p=1/n of being inserted into a given bucket because each of these elements is uniformly drawn from the range [0,1). Therefore, E[ni]=n*p=n*(1/n)=1, while the variance Var[ni]=n*p*(1-p)=(1-1/n). It is important to consider the variance since some buckets will be empty, and others may have more than one element; we need to be sure that no bucket has too many elements. Once again, we resort to statistical theory, which provides the following equation for random variables:

From this equation we can compute the expected value of ni2. This is critical because it is the factor that determines the cost of Insertion Sort, which runs in a worst case of O(n2). We compute E[ni2]=(1-1/n)+1=(2-1/n), which shows that E[ni2] is a constant. This means that when we sum up the costs of executing Insertion Sort on all n buckets, the expected performance cost remains O(n).

In Hash Sort, each bucket reflects a unique hash code value returned by the hash function used on each element. Instead of creating n buckets, Hash Sort creates a suitably large number of buckets k into which the elements are partitioned; as k grows in size, the performance of Hash Sort improves. The key to Hash Sort is a hashing function hash(e) that returns an integer for each element e such that hash(ai)≤hash(aj) if ai≤aj.

The hash function hash(e) defined in Example 4-13 operates over elements containing just lowercase letters. It converts the first three characters of the string into a value (in base 26), and so for the string "abcdefgh," its first three characters ("abc") are extracted and converted into the value 0*676+1*26+2=28. This string is thus inserted into the bucket labeled 28.

The performance of Hash Sort for various bucket sizes and input sets is shown in Table 4-5. We show comparable sorting times for Quicksort using the median-of-three approach for selecting the pivotIndex.

Table 4-5. Sample performance for Hash Sort with different numbers of buckets, compared with Quicksort (in seconds)

Note that with 17,576 buckets, Hash Sort outperforms Quicksort for n>8,192 items (and this trend continues with increasing n). However, with only 676 buckets, once n>32,768 (for an average of 48 elements per bucket), Hash Sort begins its inevitable slowdown with the accumulated cost of executing Insertion Sort on increasingly larger sets. Indeed, with only 26 buckets, once n>256, Hash Sort begins to quadruple its performance as the problem size doubles, showing how too few buckets leads to O(n2) performance.

Get Algorithms in a Nutshell now with the O’Reilly learning platform.