Angel Investing: The Gust Guide to Making Money and Having Fun Investing in Startups by David S. Rose

Get full access to Angel Investing: The Gust Guide to Making Money and Having Fun Investing in Startups and 60K+ other titles, with free 10-day trial of O'Reilly.

Why Everyone with Six Figures to Invest Should Consider Angel Investing

ANGEL INVESTING IN the past few years has moved from an arcane backwater of the financial world to a business arena that receives coverage in mainstream newspapers and hit television shows such as ABC's Shark Tank. Today, any sophisticated investor with a portfolio of alternate assets should consider direct, early-stage investments in private companies as one potential component of that portfolio. Why? Because multiple studies* have shown that over the long run, carefully selected and managed portfolios of personal angel investments—even those without a giant hit such as Pinterest—produce an average annual return of over 25 percent. Compared to average annual returns of 1 percent from bank accounts, 3 percent from bonds, 7 percent from stocks, 10 percent from hedge funds, and even 15 percent from top-tier venture capital funds, that is an impressive number. See Figure 1.1. 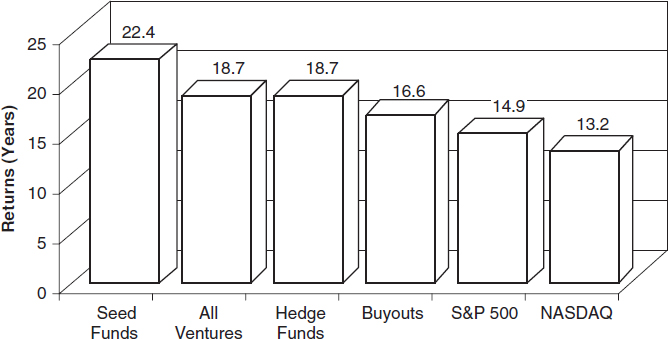 What is even more interesting about angel investing is that, unlike sitting back and clipping coupons, or reading the stock listings in the daily paper, being involved as a part owner of an exciting startup company can be ...

Get Angel Investing: The Gust Guide to Making Money and Having Fun Investing in Startups now with the O’Reilly learning platform.