Get full access to Astronomy Hacks and 60K+ other titles, with free 10-day trial of O'Reilly.

Carry what you need so you’re ready to observe at any time.

Our regular observing gear could fill an SUV. In fact, it does. We have an Isuzu Trooper—Barbara calls it Astro Truck—dedicated to astronomy. It’s always packed and ready to go on observing trips. Although it’s not always feasible to carry that much gear, that doesn’t mean we’re not prepared to observe at any time and on no notice. The trick, as the Boy Scouts say, is to Be Prepared.

The amount and type of equipment you can have available depends on the situation; here’s what we recommend.

Weight and size limitations strictly limit how much equipment you can bring along. At a minimum, carry a 7X50 or 10X50 binocular, which is also useful for observing birds and other wildlife, and a planisphere. A planisphere, shown in Figure 1-3, displays the positions of the stars for any date and time you “dial in.” (Planispheres are designed to work at a particular latitude, and they are generally produced in latitude increments of 10° The one shown is designed for use at 40° N, but is usable from 30° Nt 50° N. Choose the version that’s closest to your own latitude.) 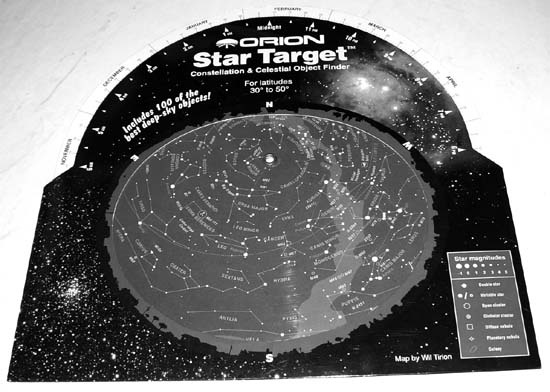 Better still, substitute a PDA with planetarium software installed for the planisphere [Hack #65]. The PDA weighs no more than the planisphere, is smaller, and packs a great deal more information. If you can afford the extra tonnage, substitute a giant binocular—12X60, 15X70, or so—for the standard binocular. Carry a couple of inflatable pillows that you can use while lying on the ground to brace yourself for stable views. A red LED flashlight and perhaps a narrowband filter, which you can hold between your eye and the binocular eyepiece, completes your kit [Hack #59].

Unfortunately, a short-tube refractor requires a mount of some sort. The best solution, if you or a companion can carry the weight, is a light tripod designed for astronomical use, such as the 7.5 pound Paragon HD-F2 sold by Orion. (Yes, it’s heavy. Lighter tripods are available, but we know of none that are stable enough for a short-tube refractor except extremely expensive models made from exotic materials.) If even a light tripod is too heavy, consider carrying a table-top tripod. That requires you to lie on the ground to observe and may limit maximum elevation of the scope, but it provides sufficient stability for moderately high power viewing. Also consider using a monopod or mounting a tripod head atop your walking stick. It limits you to moderate magnifications, but that may suffice.

For a scope-based kit, a planisphere really isn’t adequate. You need real charts to find the objects that the scope can show you, and the lightest way to carry real charts is to carry a PDA with planetarium software installed [Hack #65]—of course, with red film covering the screen to save your night vision from the glare of the PDA [Hack #44]. With the PDA, you won’t even need a red LED flashlight.

The opportunity to observe can occur any time, so it’s a good idea to carry the essentials with you in your car at all times. We define a basic car kit as a 7X50 binocular and a planisphere. With just that much, you’re prepared to grab any short observing opportunity that arises.

Our extended car kit is what we take along on trips. It’s built around our grab-'n-go 90mm long-tube refractor. (After all, if we’re traveling we don’t need the grab-'n-go sitting in our library.) We bought a zippered, padded Cordura nylon case that holds the 90mm long-tube scope, an AZ-3 altazimuth tripod mount, the Telrad and optical finders, and the associated small parts. There’s plenty of room left over for a small eyepiece case with a good selection of eyepieces and filters, a 7X50 binocular, red LED flash-lights, our Sky Atlase 2000.0 charts, and so on. In fact, other than the limitations of only 90mm aperture, we’re nearly as well equipped with our extended car kit as we are when we drive Astro Truck.

You can ship even a large scope as packed luggage, but few people are comfortable trusting their expensive optics to the tender care of the TSA and the airline baggage handlers. Accordingly, most consider “airline portable” to mean a scope they can take along as carry-on luggage, shipping only the tripod and mount as packed luggage. (Even the TSA goons can’t do much to hurt a tripod and mount, or so we hope....) Of course, there’s always FedEx.

For most people, the best choice in an airline-portable scope is a short-tube refractor. StellarVue, Takahashi, Tele Vue, Vixen, and others make suitable models that range in size from 60mm (2.4”) to 102mm (4”). Most manufacturers of airline-portable refractors also sell fitted cases that are guaranteed to meet airline size standards for under-seat stowage, and include space for eyepieces, Barlows, filters, and other accessories. Add a tripod with an equatorial or alt-azimuth mount to your packed luggage, and you’re good to go.

If you need more aperture, there is an alternative. Teleport (http://www.teleporttelescopes.com) manufactures a 7” super-premium Dobsonian telescope that, incredibly, packs up small enough to fit under an airline seat. The optics are world-class, made by Carl Zambuto, and the scope itself is designed and constructed with the quality and attention to detail of a Rolls-Royce automobile or a Rolex watch. As you might expect, this is not an inexpensive scope. The Teleport 7” model costs $4,200. Tom Noe, the principal of Teleport, makes only about 15 telescopes per year, so the waiting list is quite long. Still, if you want a perfect airline-portable scope, this is the one to get.

Get Astronomy Hacks now with the O’Reilly learning platform.