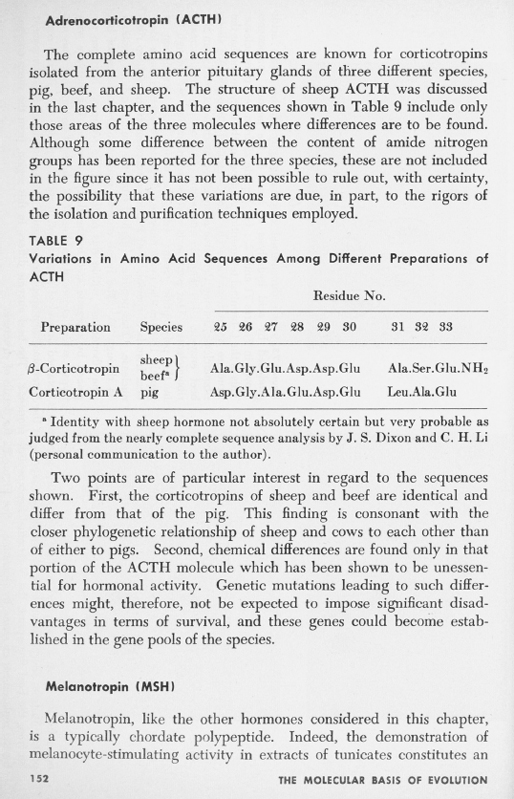 Pairwise alignment involves matching two protein or DNA sequences. The first proteins that were sequenced include insulin (by Frederick Sanger and colleagues; see Fig. 7.1) and globins. This figure is from The Molecular Basis of Evolution by the Nobel laureate Christian Anfinsen (1959, p. 153). It shows the results of a pairwise alignment of a portion of adrenocorticotropic hormone (ACTH) from sheep or cow (top) with that of pig (below). Such alignments, performed manually, led to the realization that amino acid sequences of proteins reflect the phylogenetic relatedness of different species. Furthermore, pairwise alignments reveal the portions of a protein that may be important for its biological function. Used with permission.

One of the most basic questions about a gene or protein is whether it is related to any other gene or protein. Relatedness of two proteins at the sequence level suggests that they are homologous. Relatedness also suggests that they may have common functions. By analyzing many DNA and protein sequences, it is possible to identify domains or motifs that are shared among a group of molecules. These analyses of the relatedness of proteins and genes are accomplished by aligning sequences. As we complete the sequencing ...