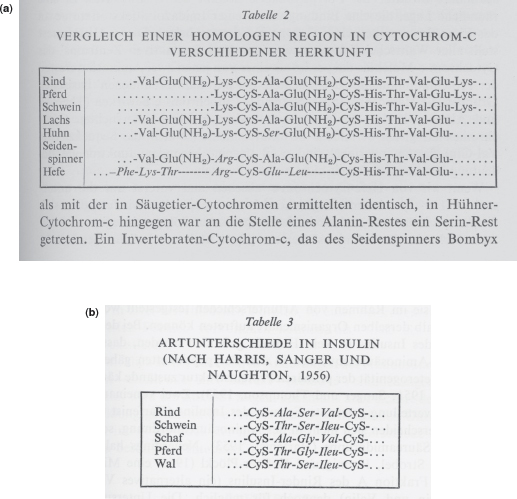 As the linear amino acid sequences of proteins were determined in the 1950s and 1960s, it became of obvious interest to try to align them. (a) Hans Tuppy (1958, p. 71) described the alignment of cytochromes c from Rind (beef), Pferd (horse), Schwein (pig), Lachs (salmon), Huhn (chicken), Seiden-spinner (silkworm), and Hefe (yeast). This alignment showed that even though gaps had to be introduced, protein sequences from organisms as distantly related as mammals and yeast could still be aligned. (b) Tuppy (1958, p. 73) also described an alignment of insulin amino acid sequences from beef, pig, Schaf (sheep), horse, and Wal (whale). In this case, he noted the lack of conservation of several amino acid residues in a region between two cysteine residues. For more details on the alignment of insulins, see Fig. 7.1. Used with permission.

When we consider a protein (or gene), one of the most fundamental questions is what other proteins are related. Biological sequences often occur in families. These families may consist of related genes within an organism (paralogs), sequences within a population (e.g., polymorphic variants), or genes in other species (orthologs). Sequences diverge from each other for reasons such as duplication within a genome ...