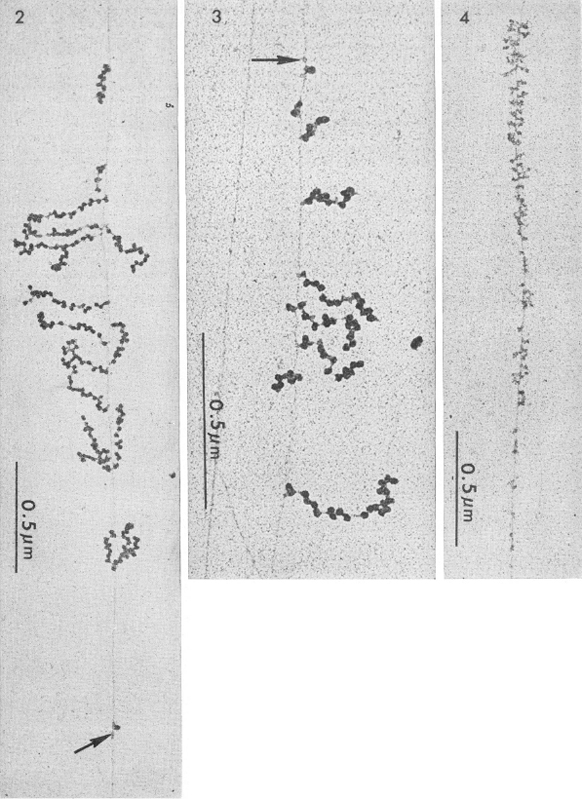 Miller and colleagues (1970, p. 394) visualized gene expression. They showed Escherichia coli chromosomal DNA (oriented vertically as a thin strand in each figure) in the process of transcription and translation. As mRNA is transcribed from the genomic DNA and extends off to the side, polyribosomes (dark objects) appear like beads on a string, translating the mRNA to protein. Used with permission.

The word “gene” was introduced by Johannsen in 1909 to describe the entity that determines how characteristics of an organism are inherited. Classic studies by Beadle and Tatum (1941) in the fungus Neurospora showed that genes direct the synthesis of enzymes in a 1:1 ratio. As early as 1944, Oswald T. Avery demonstrated that deoxyribonucleic acid (DNA) is the genetic material. Avery et al. (1944) showed that DNA from bacterial strains with high pathogenicity could transform strains with low to high pathogenicity. Further experiments involving bacterial transformation, performed by Avery, McLeod, McCarthy, Hotchkiss, and Hershey confirmed that DNA is the genetic material.

James Watson and Francis Crick proposed the double helical nature of DNA in 1953 (Fig. 8.1). Soon after, Crick 1958 could formulate the central dogma ...