Get full access to Complete Electronics Self-Teaching Guide with Projects and 60K+ other titles, with free 10-day trial of O'Reilly.

The V-I curve for a perfect diode would show zero current for all voltage values. But for a real diode, a voltage is reached where the diode “breaks down” and the diode allows a large current to flow. The V-I curve for the diode breakdown would then look like the one in Figure 2.24. 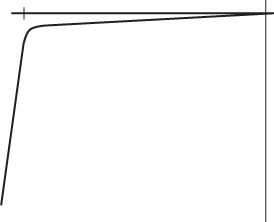 If this condition continues, the diode will burn out. You can avoid burning out the diode, even though it is at the breakdown voltage, by limiting the current with a resistor.

The diode in the circuit shown in Figure 2.25 is known to break down at 100 volts, and it can safely pass 1 ampere without overheating. Find the resistance in this circuit that would limit the current to 1 ampere. _____ 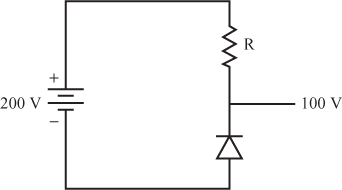 Because 1 ampere of current is flowing, ...

Get Complete Electronics Self-Teaching Guide with Projects now with the O’Reilly learning platform.