Get full access to Ethernet: The Definitive Guide and 60K+ other titles, with free 10-day trial of O'Reilly.

Full-duplex is an optional mode of operation allowing simultaneous communication between a pair of stations. The link between the stations must use a point-to-point media segment, such as twisted-pair or fiber optic media, to provide independent transmit and receive data paths. With full-duplex mode enabled, both stations can simultaneously transmit and receive, which doubles the aggregate capacity of the link. For example, a half-duplex Fast Ethernet twisted-pair segment provides a maximum of 100 Mbps of bandwidth. When operated in full-duplex, the same 100BASE-TX twisted-pair segment can provide a total bandwidth of 200 Mbps.

Another major advantage of full-duplex operation is that the maximum segment length is no longer limited by the timing requirements of shared channel half-duplex Ethernet. In full-duplex mode, the only limits are those set by the signal-carrying capabilities of the media segment. This is especially useful for fiber optic segments.

The following requirements, as stated in the 802.3x standard, must be met for full-duplex operation:

The original mode of Ethernet operation is half-duplex, based on CSMA/CD. The operation of CSMA/CD is described in detail in Chapter 3. In the CSMA/CD-based half-duplex mode of operation, only one station can transmit at any given time; other stations must defer until that transmission is complete.

Beware of confusing terms that you may find in advertising or network trade journals, such as “full-duplex repeater.” Vendors have created devices which they call "buffered repeaters,” “buffered distributors,” and “full-duplex repeaters,” but these are not true repeaters. The operation and configuration of these devices is not described in the Ethernet standard and system configuration guidelines. Instead, these devices typically operate as switching hubs. Switching hubs are described in Chapter 18.

Figure 4.1 shows two stations simultaneously sending and receiving over a full-duplex link segment. The segment provides independent data paths so that both stations can be active without interfering with one another’s transmissions. To provide full-duplex operation, both the station interface (controller ) and the transceiver at each station must support and be configured for full-duplex operation.

When sending a frame in full-duplex mode, the station ignores carrier sense and does not defer to traffic being received on the channel. However, the station still waits for an interframe gap period between frame transmissions as Ethernet interfaces are designed to expect an interframe gap between successive frames. Providing the interframe gap ensures that the interfaces at each end of the link can keep up with the full frame rate of the link. In full-duplex mode, the stations at each end of the link ignore any collision detect signals that come from the transceiver. If the transceiver has a collision detect light, then placing the transceiver in full-duplex mode means that the significance of the collision detect light is undefined, and the light should be ignored.

The CSMA/CD algorithm used on shared half-duplex Ethernet channels is not used on a link operating in full-duplex mode. A station on a full-duplex link sends whenever it likes, ignoring carrier sense (CS). There is no multiple access (MA) since there is only one station at each end of the link and the Ethernet channel between them is not the subject of access contention by multiple stations. Since there is no access contention, there will be no collisions either, so the station at each end of the link is free to ignore collision detect (CD).

While full-duplex operation has the potential to double the bandwidth of an Ethernet link segment, it usually won’t result in a large increase in performance on a link that connects to a user’s computer. That’s because most network protocols are designed to send data and then wait for an acknowledgment. This leads to asymmetric data patterns, in which most of the data is sent in one direction, and smaller amounts of data (in the form of acknowledgments) return in the other direction.

On the other hand, full-duplex links between switching hubs in a network backbone system will typically carry multiple conversations between many computers. Therefore, the aggregated traffic on backbone channels will be more symmetric, with both the transmit and receive channels seeing roughly the same amount of traffic. For that reason, the largest benefit of a full-duplex bandwidth increase is usually seen in backbone links.

Nonetheless, configuring a link to a user’s computer for full-duplex operation can still be useful. For example, if it’s a modern computer capable of placing a heavy load on an Ethernet channel, it might encounter the Ethernet capture effect described in Chapter 3. Configuring full-duplex mode shuts off the CSMA/CD algorithm and avoids any problems with capture effect.

It is essential that both ends of a link operating in full-duplex mode are configured correctly, or the link will have serious data errors. To ensure correct configuration, the standard recommends that Ethernet Auto-Negotiation (see Chapter 5) be used whenever possible to automatically configure full-duplex mode.

On a manually configured link, it is essential that both ends of the link be properly configured for full-duplex operation. If only one end of the link is in full-duplex mode, and the other is in half-duplex mode, then the half-duplex end of the link will lose frames due to errors, such as late collisions. Data will still flow across the link, but as the full-duplex end will be sending data whenever it pleases, it will not be obeying the same CSMA/CD rules as the half-duplex end. Because the misconfigured link will still support the flow of data (despite the errors), it is possible that this problem may not be detected right away. Therefore, you need to be aware that this condition can occur, and make absolutely sure that both ends of a manually configured link are set for the same mode of operation.

Table 4.1 provides a complete list of Ethernet media systems, and shows which ones can support the full-duplex mode of operation.

When a segment is operating in full-duplex mode, the CSMA/CD-based MAC is shut off. As a result, cable length limits imposed by the round-trip timing constraints of the CSMA/CD algorithm no longer exist. Since there is no round-trip timing limit, the only limit on the length of the cabling is the one imposed by the signal transmission characteristics of the cable. For that reason, some full-duplex segments can be much longer than the same segments operated in half-duplex mode.

Single-mode fiber optic media can carry signals over longer distances than multi-mode fiber. Therefore, a full-duplex fiber link can be stretched considerably further if single mode fiber media is used. In the case of a 100BASE-FX link, single-mode fiber can provide link distances of 20 km or more. For full-duplex links, you need to consult the equipment vendor for specifications on the maximum length of the segment.

The rate of traffic on network backbones is always growing, and as a result backbone switches connected together with full-duplex links can be heavily loaded with traffic. A switching hub typically has a fixed set of resources, in the form of internal switching bandwidth and packet buffers, which it apportions to its switching ports. Resources like packet buffer memory are expensive, and many low-cost switches limit these resources. To keep these limited resources from being overwhelmed, a variety of non-standard flow control mechanisms were developed by switching hub vendors for use on half-duplex segments. These include the use of a short burst of carrier signal sent by the switching hub to cause stations on a half-duplex segment to stop sending data when the buffers on a switching port are full. These mechanisms are described in more detail in Chapter 18.

This sort of mechanism is based on the half-duplex mode of operation—it will not work on a full-duplex segment that is not using the CSMA/CD algorithm and ignores things like carrier. As a result, a switching hub connected to full-duplex segments needs a new mechanism to send a flow control message. To that end, an explicit flow control message is provided by the optional MAC Control and PAUSE specifications in the 802.3x Full-Duplex supplement.

The optional MAC Control portion of the 802.3x supplement provides a mechanism for real-time control and manipulation of the frame transmission and reception process in an Ethernet station. In normal Ethernet operation, the media access control (MAC) protocol defines how to go about transmitting and receiving frames. In the optional Ethernet flow control system, the MAC Control protocol provides mechanisms to control when Ethernet frames are sent.

When implemented, the MAC Control system provides a way for the station to receive a MAC Control frame and act upon it. The operation of the MAC Control system is transparent to the normal media access control functions in a station. MAC Control is not used for a non-real-time function like configuring interfaces, which is handled by network management mechanisms. Instead, MAC Control is designed to allow stations to interact in real time to control the flow of traffic. New functions beyond flow control may be added in the future.

A station sending a PAUSE frame to the special multicast address includes the PAUSE opcode, and also includes the period of pause time being requested, in the form of a two byte integer. This number contains the length of time for which the receiving station is requested to stop transmitting data. The pause time is measured in units of pause “quanta,” where each unit is equal to 512 bit times. The range of possible pause time requests is from through 65,535 units.

Figure 4.2 shows what a PAUSE frame looks like. The PAUSE fields are carried in the data field of the MAC Control frame. The MAC Control opcode of 0x0001 indicates that this is a PAUSE frame. The PAUSE frame carries a single parameter, defined as the pause_time in the standard. In this example, the contents of pause_time is 2, indicating a request that the device at the other end of the link stop transmitting for a period of two slot times. 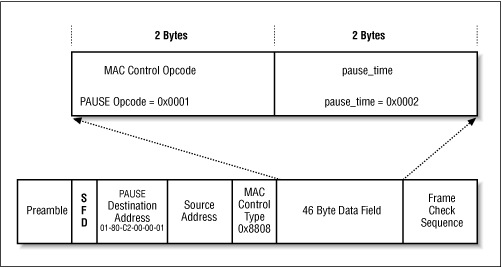 By using MAC Control frames to send PAUSE requests, a station at one end of a full-duplex link can request the station at the other end of the link to stop transmitting data for a period of time. This provides real-time flow control between switching hubs, or even between a switching hub and a server which are equipped with the optional MAC Control software and connected by a full-duplex link.

[1] Media system connectors are described in detail in Chapter 6.

[6] “PAUSE” is not an acronym. Instead, PAUSE is written in uppercase letters to indicate that the word is a formally defined function in the full-duplex Ethernet standard. This is common practice for formally defined words and phrases in the standard.

Get Ethernet: The Definitive Guide now with the O’Reilly learning platform.