Get full access to Expert Podcasting Practices For Dummies® and 60K+ other titles, with free 10-day trial of O'Reilly.

Adobe Premiere Pro is one of the first applications to affordably bring the art of video editing to the home computer. Some high‐end video‐editing software programs (and their accompanying systems) cost tens of thousands of dollars, but Adobe Premiere costs less than $800. Its nonlinear editing capabilities are used widely for creating video in‐house for broadcast, podcast, and other means of distribution. (In‐house means that instead of farming out the video for editing elsewhere, the video is produced and output at your place of work, in your home, or by you personally wherever you work on it.) For in‐house Windows users, Adobe Premiere Pro is the editing tool of choice.

The curtain is up, the stage is ready, and now you're ready to create a diamond from the rough footage you've amassed. In this chapter, we cover what you need to get started editing in Adobe Premiere Pro.

Adobe Premiere Pro (shown in Figure 40-1 ) is the must‐have video editor for Windows users, offering sharp transitions between scenes, an array of effects, and various output formats for broadcast, podcasting, and other forms of playback. Adobe Premiere Pro even lets you color‐correct oddly‐lit video footage. 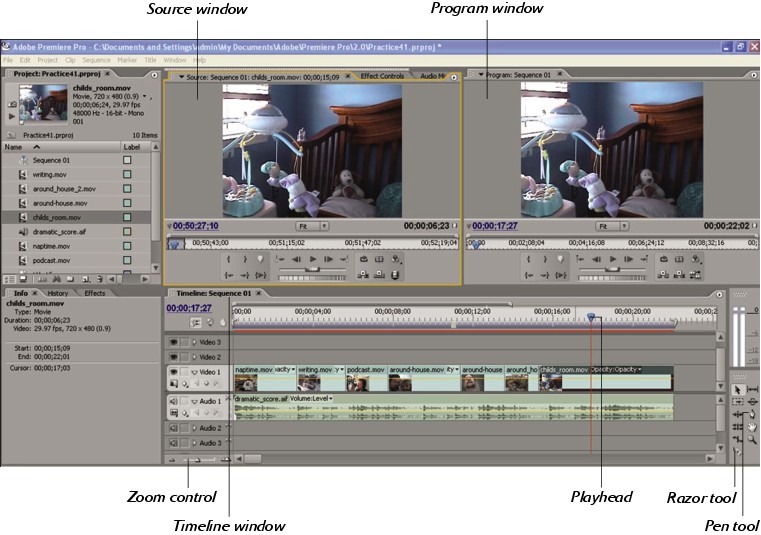 Get Expert Podcasting Practices For Dummies® now with the O’Reilly learning platform.