Getting Started with Storm by

Get full access to Getting Started with Storm and 60K+ other titles, with free 10-day trial of O'Reilly.

Storm is a distributed, reliable, fault-tolerant system for processing streams of data. The work is delegated to different types of components that are each responsible for a simple specific processing task. The input stream of a Storm cluster is handled by a component called a spout. The spout passes the data to a component called a bolt, which transforms it in some way. A bolt either persists the data in some sort of storage, or passes it to some other bolt. You can imagine a Storm cluster as a chain of bolt components that each make some kind of transformation on the data exposed by the spout.

To illustrate this concept, here’s a simple example. Last night I was watching the news when the announcers started talking about politicians and their positions on various topics. They kept repeating different names, and I wondered if each name was mentioned an equal number of times, or if there was a bias in the number of mentions.

Imagine the subtitles of what the announcers were saying as your input stream of data. You could have a spout that reads this input from a file (or a socket, via HTTP, or some other method). As lines of text arrive, the spout hands them to a bolt that separates lines of text into words. This stream of words is passed to another bolt that compares each word to a predefined list of politician’s names. With each match, the second bolt increases a counter for that name in a database. Whenever you want to see the results, you just query that database, which is updated in real time as data arrives. The arrangement of all the components (spouts and bolts) and their connections is called a topology (see Figure 1-1). 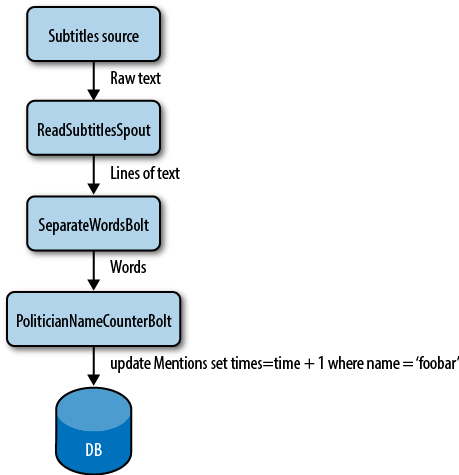 Now imagine easily defining the level of parallelism for each bolt and spout across the whole cluster so you can scale your topology indefinitely. Amazing, right? Although this is a simple example, you can see how powerful Storm can be.

What are some typical use cases for Storm?

As demonstrated in the preceding example, unlike other stream processing systems, with Storm there’s no need for intermediate queues.

Send data to clients continuously so they can update and show results in real time, such as site metrics.

The Components of Storm

In a Storm cluster, nodes are organized into a master node that runs continuously.

Since Storm keeps all cluster states either in Zookeeper or on local disk, the daemons are stateless and can fail or restart without affecting the health of the system (see Figure 1-2).

Figure 1-2. Components of a Storm cluster

The Properties of Storm

Within all these design concepts and decisions, there are some really nice properties that make Storm unique.

If you’ve ever tried doing real-time processing from scratch, you’ll understand how painful it can become. With Storm, complexity is dramatically reduced.

It’s easier to develop in a JVM-based language, but Storm supports any language as long as you use or implement a small intermediary library.

The Storm cluster takes care of workers going down, reassigning tasks when necessary.

All you need to do in order to scale is add more machines to the cluster. Storm will reassign tasks to new machines as they become available.

All messages are guaranteed to be processed at least once. If there are errors, messages might be processed more than once, but you’ll never lose any message.

Speed was one of the key factors driving Storm’s design.

You can get exactly once messaging semantics for pretty much any computation.

Get Getting Started with Storm now with the O’Reilly learning platform.