How iMovie Organizes Its Files

Thousands of people will come to iMovie 6 for the first time, observing that each movie is saved as a single document icon. They’ll go on through life, believing that an iMovie project is a simple, one-icon file, just like a JPEG photo or a Microsoft Word document.

What iMovie creates is not really a document icon. It’s a package icon, which, to Mac OS X aficionados, is code for “a thinly disguised folder.” Yes, it opens up like a document when double-clicked. But if you know what you’re doing, you can open it like a folder instead, and survey the pieces that make up an iMovie movie.

If you don’t know what you’re doing, you can hopelessly mangle your movie. Still, now and then, checking out package contents can get you out of a troubleshooting jam.

To reveal the contents of this folder-pretending-to-be-a-document, use the Controlkey trick revealed in Figure 4-16. 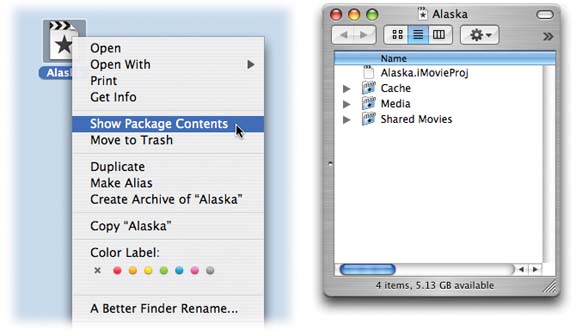 Figure 4-16. Left: Every new iMovie project “file” is actually a folder. To open it, Controlclick it (or right-click it, if you have a second mouse button). From the shortcut menu, choose Show Package Contents.Right: Inside, the contents look very similar to the contents of an old iMovie project folder, shown in Figure 4-14.

Once you’ve opened up a package into a folder, it looks and works almost exactly like the project folder of older iMovie versions, illustrated in Figure 4-14. Here’s a rundown of the files and folders they have in common.

The actual iMovie project file—called Alaska at right in Figure 4-16—occupies only a few kilobytes of space on the disk, even if it’s a very long movie. Behind the scenes, this document contains nothing more than a list of internal references to the QuickTime clips in the Media folder. Even if you copy, chop, split, rearrange, rename, and otherwise spindle the clips in iMovie, the names and quantity of clips in the Media folder don’t change; all of your iMovie editing, technically speaking, simply shuffles around your project file’s internal pointers to different moments on the clips you originally captured from the camcorder.

The bottom line: If you burn the project document to a CD and take it home to show the relatives for the holidays, you’re in for a rude surprise. It’s nothing without its accompanying Media folder. (And that’s why iMovie now creates a package folder that keeps the document and its media files together.)

Inside the Media folder are several, or dozens, or hundreds of individual QuickTime movies, graphics, and sound files. These represent each clip, sound, picture, or special effect you used in your movie.

Never rename, move, or delete the files in the Media folder. iMovie will become cranky, display error messages, and forget how you had your movie the last time you opened it.

Do your deleting, renaming, and rearranging in iMovie, not in the Media folder. And above all, don’t take the Media folder (or the project document) out of the package window. Doing so will render your movie uneditable.

This folder contains two items worth knowing about:

This folder is where iMovie stores little scraps and bits it needs for its own use. For example:

Audio waveforms are visual “sound waves” that appear on audio clips. These visible peaks and valleys make it a lot easier to cue up certain video moments with the audio.

These graphic representations of your sound files don’t appear by magic, though. First, you have to turn on this feature by choosing View → Show Clip Volume Levels. Then, iMovie has to compute the waveforms’ shapes, based on the sonic information in each clip.

Because that computational task takes time, iMovie stores a copy of these visuals in the Audio Waveforms folder, which it creates on the fly. Thereafter, each time you open your iMovie project, you won’t have to wait for the waveforms to appear. iMovie will retrieve the information about their shapes from the files in this folder and blast them onto the screen in a matter of moments. (The .wvf files are the waveform graphics; .snp files store “snap to” information for Timeline snapping, as described and illustrated in Section 8.2.)