Get full access to iPhone Hacks and 60K+ other titles, with free 10-day trial of O'Reilly.

In the world of GSM-based cellular providers, it is the SIM card, not the phone, that determines what network you connect to. Some people have a collection of GSM phones and swap their SIM card between them (Figure 7-1). It is even a good backup strategy for the mobile businessperson to have two phones, in case one breaks or runs out of battery charge. 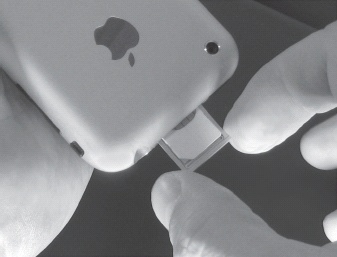 Because the iPhone is a GSM phone, it is physically capable of connecting to most GSM networks.

Many mobile phones around the world are subsidized. The manufacturer expects to make $300USD, $500, or more on the phone. Instead, it is sold for $100, $200, or given away “free” for consumers who agree to be locked in to a contract for a year or longer. You pay for part of your phone, and your mobile carrier pays for part of it, in exchange for having you as a customer for a while. And if you leave early, you have to pay to break your contract.

You’d think that this would be enough for people to stick with a carrier. But there’s also exclusivity. Any mobile phone vendor is free to make exclusive deals with carriers, so that they can have a limited-time “exclusive” on a hot new phone. Yet even when they sell the same phone to all carriers in a market, they still have a habit of locking the phones, so that phones sold by a given carrier will work only with SIM cards from that carrier.

Get iPhone Hacks now with the O’Reilly learning platform.