Get full access to Java Threads, Second Edition and 60K+ other titles, with free 10-day trial of O'Reilly.

This leaves us only one more term to define: what exactly is a thread? The term thread is shorthand for thread of control, and a thread of control is, at its simplest, a section of code executed independently of other threads of control within a single program.

Thread of control sounds like a complicated technical term, but it’s really a simple concept: it is the path taken by a program during execution. This determines what code will be executed: does the if block get executed, or does the else block? How many times does the while loop execute? If we were executing tasks from a “to do” list, much as a computer executes an application, what steps we perform and the order in which we perform them is our path of execution, the result of our thread of control.

Having multiple threads of control is like executing tasks from two lists. We are still doing the tasks on each “to do” list in the correct order, but when we get bored with the tasks on one of the lists, we switch lists with the intention of returning at some future time to the first list at the exact point where we left off.

We’re all familiar with the use of multitasking operating systems to run multiple programs simultaneously. Each of these programs has at least one thread within it, so at some level, we’re already comfortable with the notion of a thread in a single process. The single-threaded process has the following properties, which, as it turns out, are shared by all threads in a program with multiple threads as well:

Now consider what happens when you sit at your computer and start two single-threaded programs: a text editor, say, and a file manager. You now have two processes running on your computer; each process has a single thread with the properties just outlined. Each process does not necessarily know about the other process, although, depending on the operating system running on your computer, there are several ways in which the processes can send each other various messages. A common behavior is that you can drag a file icon from the file manager into the text editor in order to edit the file. Each process thus runs independently of the other, although they can cooperate if they so choose. The typical multitasking environment is shown in Figure 1.1.

Figure 1-1. Processes in a multitasking environment

From the point of view of the person using the computer, these processes often appear to execute simultaneously, although many variables can affect that appearance. These variables depend on the operating system: for example, a given operating system may not support multitasking at all, so that no two programs appear to execute simultaneously. Or the user may have decided that a particular process is more important than other processes and hence should always run, shutting out the other processes from running and again affecting the appearance of simultaneity.

Finally, the data contained within these two processes is, by default, separated: each has its own stack for local variables, and each has its own data area for objects and other data elements. Under many operating systems, the programmer can make arrangements so that the data objects reside in memory that can be shared between the processes, allowing both processes to access them.

All of this leads us to a common analogy: we can think of a thread just as we think of a process, and we can consider a program with multiple threads running within a single instance of the Java virtual machine just as we consider multiple processes within an operating system, as we show in Figure 1.2. 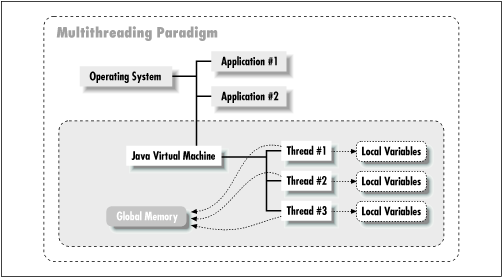 So it is that within a Java program, multiple threads have these properties:

Don’t panic over this analogy: the fact that you’ll be programming with threads in Java doesn’t mean you’ll necessarily be doing the system-level type of programming you’d need to perform if you were writing the multitasking operating system responsible for running multiple programs. The Java Thread API is designed to be simple and requires little specialized skill for most common tasks.