Get full access to Learning JavaScript and 60K+ other titles, with free 10-day trial of O'Reilly.

The Browser Object Model (BOM) is a set of objects inherited from the browser context in which most JavaScript applications function. Itâs sometimes referred to as the Document Object Model Level 0, or even as the DOM, but itâs a finite set of common web objects that have been accessible via JavaScript since earlier versions of Netscape Navigator and Microsoftâs Internet Explorer.

Weâve worked with some of the objectsâwindow, document, navigator, and formâin earlier chapters. This chapter looks at these in more detail, as well as the other objects that complete the set.

BOM at a Glance

The BOM forms a hierarchy of objects, with each object at each level accessible via a parent object above it. All of the elements of the BOM are accessible via the window, which is the topmost element. The next level below features document, which weâve used extensively. The level also contains the navigator, frames, location, history, and screen objects. From the document, several collections of objects are accessible: forms, anchors, links, and images. As demonstrated in Chapter 3, the form itself has elements, but weâll stop at just the top three levels in this chapter.

Figure 9-1 shows the BOM at a glance, and how all of these elements relate to each other. 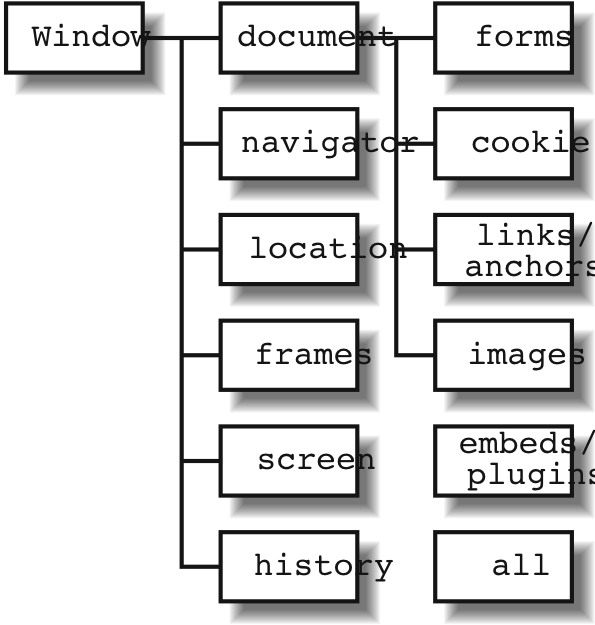 As can be quickly seen, window is the top ...

Get Learning JavaScript now with the O’Reilly learning platform.