Get full access to Learning PHP, MySQL, and JavaScript and 60K+ other titles, with free 10-day trial of O'Reilly.

Conditionals alter program flow. They enable you to ask questions about certain things and respond to the answers you get in different ways. Conditionals are central to dynamic web pagesâthe goal of using PHP in the first placeâbecause they make it easy to create different output each time a page is viewed.

One way of thinking about program flow is to imagine it as a single-lane highway that you are driving along. Itâs pretty much a straight line, but now and then you encounter various signs telling you where to go.

In the case of an if statement, you could imagine coming across a detour sign that you have to follow if a certain condition is TRUE. If so, you drive off and follow the detour until you return to where it started and then continue on your way in your original direction. Or, if the condition isnât TRUE, you ignore the detour and carry on driving (see FigureÂ 4-1). 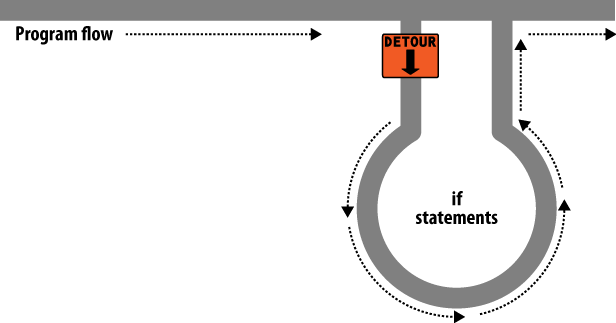 FigureÂ 4-1.Â Program flow is like a single-lane highway

The contents of the if condition can be any valid PHP expression, including equality, comparison, tests for zero and NULL, and even the values returned by functions (either built-in functions or ones that you write).

The action to take when an if condition is TRUE are generally placed inside curly braces, { }. However, you can ignore the braces if you have only a single statement to execute. But if you always use curly braces, youâll avoid having to hunt down difficult-to-trace bugs, such as when you add an extra line to a condition and it doesnât get evaluated due to lack of braces. (Note that for space and clarity, many of the examples in this book ignore this suggestion and omit the braces for single statements.)

In ExampleÂ 4-19, imagine that it is the end of the month and all your bills have been paid, so you are performing some bank account maintenance.

ExampleÂ 4-19.Â An if statement with curly braces

In this example, you are checking your balance to see whether it is less than 100 dollars (or whatever your currency is). If so, you pay yourself 1,000 dollars and then add it to the balance. (If only making money were that simple!)

If the bank balance is 100 dollars or greater, the conditional statements are ignored and program flow skips to the next line (not shown).

In this book, opening curly braces generally start on a new line. Some people like to place the first curly brace to the right of the conditional expression; others start a new line with it. Either of these is fine, because PHP allows you to set out your whitespace characters (spaces, newlines, and tabs) any way you choose. However, you will find your code easier to read and debug if you indent each level of conditionals with a tab.

Sometimes when a conditional is not TRUE, you may not want to continue on to the main program code immediately but might wish to do something else instead. This is where the else statement comes in. With it, you can set up a second detour on your highway, as in FigureÂ 4-2. 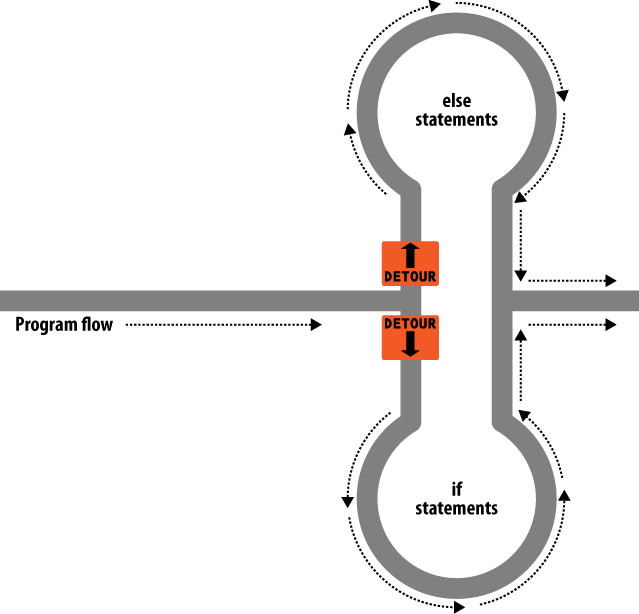 FigureÂ 4-2.Â The highway now has an if detour and an else detour

In this example, having ascertained that you have over $100 in the bank, the else statement is executed, by which you place some of this money into your savings account.

As with if statements, if your else has only one conditional statement, you can opt to leave out the curly braces. (Curly braces are always recommended, though. First, they make the code easier to understand. Second, they let you easily add more statements to the branch later.)

There are also times when you want a number of different possibilities to occur, based upon a sequence of conditions. You can achieve this using the elseif statement. As you might imagine, it is like an else statement, except that you place a further conditional expression prior to the conditional code. In ExampleÂ 4-21, you can see a complete if...elseif...else construct.

In the example, an elseif statement has been inserted between the if and else statements. It checks whether your bank balance exceeds $200 and, if so, decides that you can afford to save $100 of it this month.

Although Iâm starting to stretch the metaphor a bit too far, you can imagine this as a multiway set of detours (see FigureÂ 4-3). 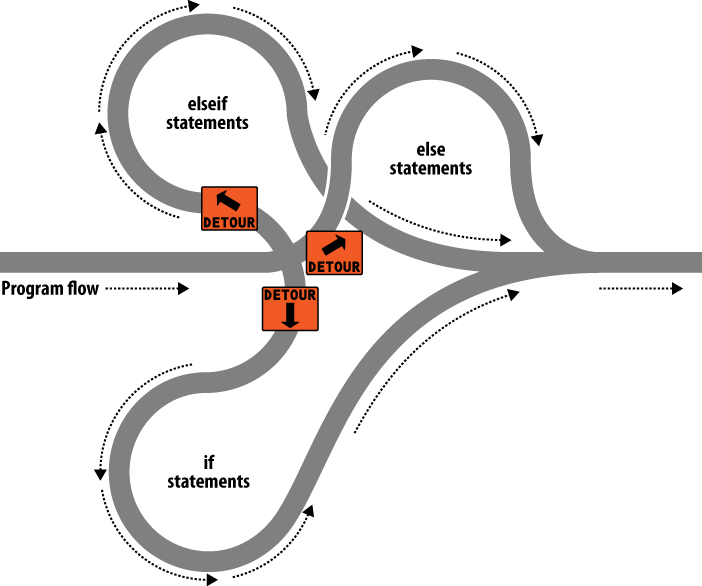 FigureÂ 4-3.Â The highway with if, elseif, and else detours

The switch statement is useful in cases in which one variable or the result of an expression can have multiple values, which should each trigger a different function.

For example, consider a PHP-driven menu system that passes a single string to the main menu code according to what the user requests. Letâs say the options are Home, About, News, Login, and Links, and we set the variable $page to one of these, according to the userâs input.

As you can see, $page is mentioned only once at the start of the switch statement. Thereafter, the case command checks for matches. When one occurs, the matching conditional statement is executed. Of course, in a real program you would have code here to display or jump to a page, rather than simply telling the user what was selected.

One thing to note about switch statements is that you do not use curly braces inside case commands. Instead, they commence with a colon and end with the break statement. The entire list of cases in the switch statement is enclosed in a set of curly braces, though.

If you were to leave out the break commands in ExampleÂ 4-23 and the case of âHomeâ evaluated to be TRUE, all five cases would then be executed. Or if $page had the value âNews,â then all the case commands from then on would execute. This is deliberate and allows for some advanced programming, but generally you should always remember to issue a break command every time a set of case conditionals has finished executing. In fact, leaving out the break statement is a common error.

If you prefer, you may replace the first curly brace in a switch statement with a single colon, and the final curly brace with an endswitch command, as in ExampleÂ 4-25. However this approach is not commonly used and is mentioned here only in case you encounter it in third-party code.

One way of avoiding the verbosity of if and else statements is to use the more compact ternary operator, ?, which is unusual in that it takes three operands rather than the more usual two.

We briefly came across this in ChapterÂ 3 in the discussion about the difference between the print and echo statements as an example of an operator type that works well with print but not echo.

The ? operator is passed an expression that it must evaluate, along with two statements to execute: one for when the expression evaluates to TRUE, the other for when it is FALSE. ExampleÂ 4-26 shows code we might use for writing a warning about the fuel level of a car to its digital dashboard.

In this statement, if there is one gallon or less of fuel (in other words $fuel is set to 1 or less), the string âFill tank nowâ is returned to the preceding echo statement. Otherwise, the string âThereâs enough fuelâ is returned. You can also assign the value returned in a ? statement to a variable (see ExampleÂ 4-27).

ExampleÂ 4-27.Â Assigning a ? conditional result to a variable

If you find the ? operator confusing, you are free to stick to if statements, but you should be familiar with it, because youâll see it in other peopleâs code. It can be hard to read, because it often mixes multiple occurrences of the same variable. For instance, code such as the following is quite popular:

If you take it apart carefully, you can figure out what this code does:

Itâs a concise way to keep track of the largest value that youâve seen as a program progresses. You save the largest value in $saved and compare it to $new each time you get a new value. Programmers familiar with the ? operator find it more convenient than if statements for such short comparisons. When not used for writing compact code, it is typically used to make some decision inline, such as when testing whether a variable is set before passing it to a function.

Get Learning PHP, MySQL, and JavaScript now with the O’Reilly learning platform.