Get full access to Learning Red Hat Linux, Second Edition and 60K+ other titles, with free 10-day trial of O'Reilly.

Once you’ve established a PPP connection to the Internet, whether via rp3 or wvdial, you can surf the Web using a browser. In addition to browsers written specifically for Unix and Linux, you can use Mozilla’s web browser, which includes a mail client, newsgroup client, HTML editor, and other features. With the release of Red Hat 7.2, Mozilla is the default web browser under GNOME; however, Netscape Communicator is also available. This section surveys several popular Linux web browsers:

Konqueror, which is the default file manager/web browser for KDE, is described in Chapter 6.

The Mozilla project aims to implement a fully functioned, open source web browser. Recent releases have begun to approach that goal. Figure 10-10 shows the same web page as the preceding figure, rendered by Mozilla rather than Konqueror. A few details differ, mainly because the web page includes dynamic content. 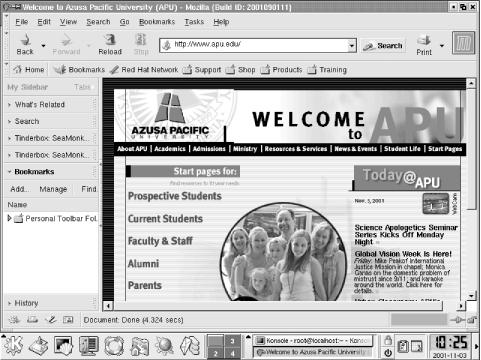 If you installed GNOME or KDE and the Mail/WWW/News package group during system installation, Mozilla will be installed on your system.

Like Netscape Communicator, Mozilla appears in the GNOME and KDE menus. To launch Mozilla manually, issue the following command from an X terminal:

Netscape Navigator still rules the Linux world as it once ...