Get full access to Programming ASP.NET 3.5, 4th Edition and 60K+ other titles, with free 10-day trial of O'Reilly.

The VS2008 IDE consists of windows for the visual design of forms, code-editing windows, menus, and toolbars providing access to commands and features. It also consists of toolboxes containing controls for use on the forms and windows providing properties and information about forms, controls, projects, and the solution.

But more important than the physical layout of the IDE is the productivity boost it provides to you, the developer. You can visually drag controls from the toolbox onto a design window or a code window. In code-editing windows, IntelliSense automatically pops up a list of all the available members for any given situation. Syntax errors are highlighted in code windows, signaling a problem even before you try to compile the project. The list goes on: a little time invested getting familiar with the IDE will reap tremendous payback.

A typical layout of the IDE is shown in Figure 2-11. Basically, it consists of a menu and toolbar arrangement across the top and a work surface below, flanked by other toolbars and windows. 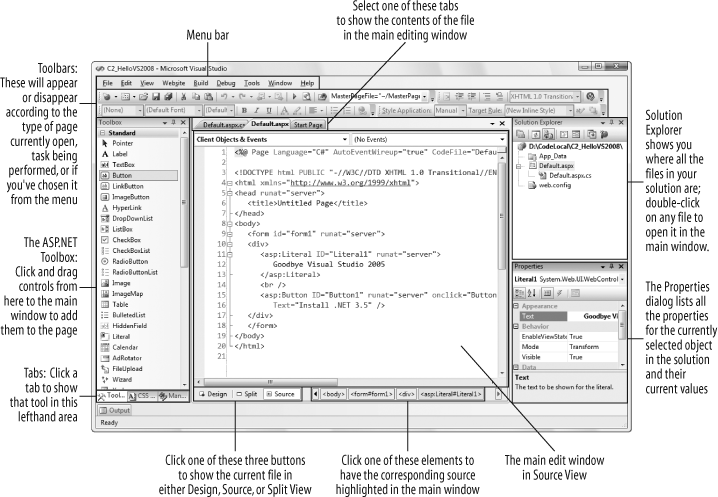 When you’re working on content files, such as page, ...