Get full access to Programming C#, 4th Edition and 60K+ other titles, with free 10-day trial of O'Reilly.

Chapter 1. C# and the .NET Framework

The goal of C# 2.0 is to provide a simple, safe, modern, object-oriented, Internet-centric, high-performance language for .NET development. C# is now a fully mature language, and it draws on the lessons learned over the past three decades. In much the way that you can see in young children the features and personalities of their parents and grandparents, you can easily see in C# the influence of Java, C++, Visual Basic (VB), and other languages, but you can also see the lessons learned since C# was first introduced.

The focus of this book is the C# language and its use as a tool for programming on the .NET platform, specifically and especially with Visual Studio .NET 2005 (full or Express Edition).

Many of the programs in this book are written as console applications (rather than as Windows or web applications) to facilitate concentrating on features of the language instead of being distracted by the details of the user interface.

If you are using Mono or other non-Microsoft versions of C#, you should find that all of the programs in this book work just fine, though we have not tested on anything other than the Microsoft authorized version.

This chapter introduces both the C# language and the .NET platform, including the .NET Framework.

When Microsoft announced C# in July 2000, its unveiling was part of a much larger event: the announcement of the .NET platform. C# 2.0 represents the maturation of that language and coincides with the release of the next generation of tools for .NET.

The .NET platform is a development framework that provides a new application programming interface (API) to the services and APIs of classic Windows operating systems while bringing together a number of disparate technologies that emerged from Microsoft during the late 1990s. This includes COM+ component services, a commitment to XML and object-oriented design, support for new web services protocols such as SOAP, WSDL, and UDDI, and a focus on the Internet, all integrated within the Distributed interNet Applications (DNA) architecture.

Microsoft has devoted enormous resources to the development of .NET and its associated technologies. The results of this commitment to date are impressive. For one thing, the scope of .NET is huge. The platform consists of three product groups:

Microsoft .NET supports not only language independence, but also language integration. This means that you can inherit from classes, catch exceptions, and take advantage of polymorphism across different languages. The .NET Framework makes this possible with a specification called the Common Type System (CTS) that all .NET components must obey. For example, everything in .NET is an object of a specific class that derives from the root class called System.Object. The CTS supports the general concept of classes, interfaces, and delegates (which support callbacks).

Additionally, .NET includes a Common Language Specification (CLS), which provides a series of basic rules that are required for language integration. The CLS determines the minimum requirements for being a .NET language. Compilers that conform to the CLS create objects that can interoperate with one another. The entire Framework Class Library (FCL) can be used by any language that conforms to the CLS.

The .NET Framework sits on top of the operating system, which can be any flavor of Windows,[1] and consists of a number of components, currently including:

Figure 1-1 breaks down the .NET Framework into its system architectural components. 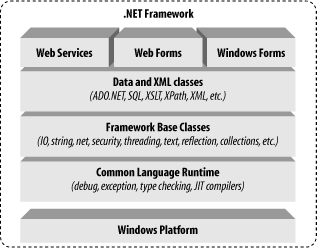 The most important component of the .NET Framework is the CLR, which provides the environment in which programs are executed. The CLR includes a virtual machine, analogous in many ways to the Java virtual machine. At a high level, the CLR activates objects, performs security checks on them, lays them out in memory, executes them, and garbage-collects them. (The Common Type System is also part of the CLR.)

In Figure 1-1, the layer on top of the CLR is a set of framework classes, followed by an additional layer of data and XML classes, plus another layer of classes intended for web services, Web Forms, and Windows Forms. Collectively, these classes make up the FCL, one of the largest class libraries in history and one that provides an object-oriented API for all the functionality that the .NET platform encapsulates. With more than 4,000 classes, the FCL facilitates rapid development of desktop, client/server, and other web services and applications.

The set of Framework base classes, the lowest level of the FCL, is similar to the set of classes in Java. These classes support input and output, string manipulation, security management, network communication, thread management, text manipulation, reflection and collections functionality, etc.

Above this level is a tier of classes that extend the base classes to support data management and XML manipulation. The data classes support persistent management of data that is maintained on backend databases. These classes include the Structured Query Language (SQL) classes to let you manipulate persistent data stores through a standard SQL interface. The .NET Framework also supports a number of classes to let you manipulate XML data and perform XML searching and translations.

Extending the Framework base classes and the data and XML classes is a tier of classes geared toward building applications using three different technologies: web services, Web Forms, and Windows Forms. Web services include a number of classes that support the development of lightweight distributed components, which will work even in the face of firewalls and NAT software. Because web services employ standard HTTP and SOAP as underlying communications protocols, these components support Plug and Play across cyberspace.

Web Forms and Windows Forms allow you to apply Rapid Application Development (RAD) techniques to building web and Windows applications. Simply drag and drop controls onto your form, double-click a control, and write the code to respond to the associated event.

Compilation and the MSIL

In .NET, programs aren’t compiled into executable files; they are compiled into assemblies that consist of Microsoft Intermediate Language (MSIL) instructions, which the CLR then converts into machine code and executes. The MSIL (often shortened to IL) files C# produces are nearly identical to the IL files other .NET languages produce; the platform is language-agnostic. A key fact about the CLR is that it is common: the same runtime supports development in C# as well as in VB.NET.

C# code is compiled into IL when you build your project. The IL is saved in a file on disk. When you run your program, the IL is compiled again, using the Just In Time (JIT) compiler (a process often called JITing). The result is machine code, executed by the machine’s processor.

The standard JIT compiler runs on demand. When a method is called, the JIT compiler analyzes the IL and produces highly efficient machine code, which runs very fast. As the application runs, compilation happens only as needed, and once JIT-compiled, the code is cached for future use. As .NET applications run, they tend to become faster and faster, as the already compiled code is reused.

The CLS means that all .NET languages produce very similar IL code. As a result, objects created in one language can be accessed and derived from another. Thus it is possible to create a base class in VB.NET and derive from it in C#.

The C# language is disarmingly simple, with only about 80 keywords and a dozen built-in datatypes, but it’s highly expressive when it comes to implementing modern programming concepts. C# includes all the support for structured, component- based, object-oriented programming that you expect of a modern language built on the shoulders of C++ and Java, and now with Version 2.0, many of the most important missing ingredients, such as generics and anonymous methods, have been added.

C++ programmers take note: generics are the C# equivalent to Templates, though it turns out that C# generics are a bit simpler and more efficient than C++ templates; they reduce code bloat by reusing shared code at runtime, while giving up a bit of the flexibility available with C++ templates.

The C# language was developed by a small team led by two distinguished Microsoft engineers, Anders Hejlsberg and Scott Wiltamuth. Hejlsberg is also known for creating Turbo Pascal, a popular language for PC programming, and for leading the team that designed Borland Delphi, one of the first successful integrated development environments for client/server programming.

At the heart of any object-oriented language is its support for defining and working with classes. Classes define new types, allowing you to extend the language to better model the problem you are trying to solve. C# contains keywords for declaring new classes and their methods and properties, and for implementing encapsulation, inheritance, and polymorphism, the three pillars of object-oriented programming.

In C#, everything pertaining to a class declaration is found in the declaration itself. C# class definitions don’t require separate header files or Interface Definition Language (IDL) files. Moreover, C# supports a new XML style of inline documentation that simplifies the creation of online and print reference documentation for an application.

C# also supports interfaces, a means of making a contract with a class for services that the interface stipulates. In C#, a class can inherit from only a single parent, but a class can implement multiple interfaces. When it implements an interface, a C# class in effect promises to provide the functionality the interface specifies.

C# also provides support for structs, a concept whose meaning has changed significantly from C++. In C#, a struct is a restricted, lightweight type that, when instantiated, makes fewer demands on the operating system and on memory than a conventional class does. A struct can’t inherit from a class or be inherited from, but a struct can implement an interface.

C# provides full support of delegates : to provide invocation of methods through indirection. In other languages, such as C++, you might find similar functionality (as in pointers to member functions), but delegates are type-safe reference types that encapsulate methods with specific signatures and return types.

C# provides component-oriented features, such as properties, events, and declarative constructs (such as attributes). Component-oriented programming is supported by the storage of metadata with the code for the class. The metadata describes the class, including its methods and properties, as well as its security needs and other attributes, such as whether it can be serialized; the code contains the logic necessary to carry out its functions. A compiled class is thus a self-contained unit. Therefore, a hosting environment that knows how to read a class’ metadata and code needs no other information to make use of it. Using C# and the CLR, it is possible to add custom metadata to a class by creating custom attributes. Likewise, it is possible to read class metadata using CLR types that support reflection.

When you compile your code you create an assembly. An assembly is a collection of files that appear to the programmer to be a single dynamic link library (DLL) or executable (EXE). In .NET, an assembly is the basic unit of reuse, versioning, security, and deployment. The CLR provides a number of classes for manipulating assemblies.

A final note about C# is that it also provides support for: