Get full access to Rails on Windows and 60K+ other titles, with free 10-day trial of O'Reilly.

Installing Ruby on Rails on Windows is a simple and straightforward process. Thankfully, the One-Click Ruby Installer exists, making it almost painless to get Ruby and RubyGgems installed on our system.

The One-Click Ruby Installer comes prepackaged with a lot of useful libraries. You can obtain this package at http://rubyforge.org/projects/rubyinstaller/.

This version contains the 1.8.6 version of Ruby for Windows and should work just fine for Rails.[1] 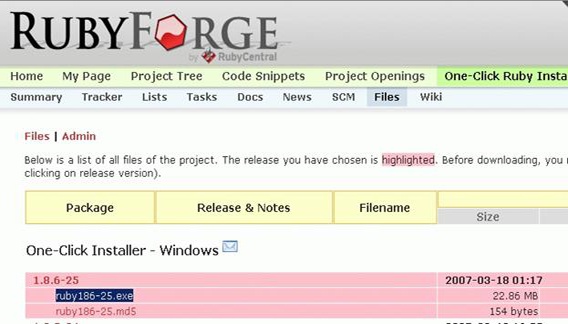 Download the installer to your machine and run it. Accept all the default options, but make sure that "Enable RubyGems" is checked (see FigureÂ 13).

RubyGems is an installer for Ruby programs or libraries distributed as "gems." It helps manage dependencies and also lets you easily update libraries on your system. You'll use the gem command quite often. The One-Click Ruby Installer installs RubyGems for you along with several other popular gems.

Although RubyGems was installed on your machine when you installed Ruby, it doesn't hurt to check to make sure you have the latest ...

Get Rails on Windows now with the O’Reilly learning platform.