Get full access to Running Mac OS X Tiger and 60K+ other titles, with free 10-day trial of O'Reilly.

The primary tool for working with disks and filesystems is the Disk Utility (found in /Applications/Utilities), shown in Figure 9-5. The Disk Utility can be used to configure, format, eject, and partition disks of all kinds. On the left side of Disk Utility’s interface is a list of the disks attached to your machine and the volumes that exist on those disks. Additionally, if you have any disk images mounted, a list of the most recently accessed files appears at the bottom of the left column. On the right side of the interface is a set of panels that give you access to the actions that you can accomplish with a drive. At the bottom of the window is a status display that gives you all sorts of information about the disk or volume you have selected. 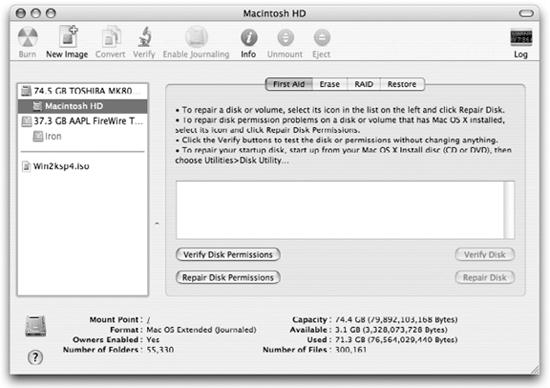 Some of the tasks you can perform with Disk Utility are: