Get full access to Secure Programming Cookbook for C and C++ and 60K+ other titles, with free 10-day trial of O'Reilly.

Your process runs with extra privileges granted by the setuid or setgid bits on the executable. Because it requires those privileges at various times throughout its lifetime, it can’t permanently drop the extra privileges. You would like to limit the risk of those extra privileges being compromised in the event of an attack.

The result is that the child performs the bulk of the program’s work. The parent retains the extra privileges and does nothing except communicate with the child and perform privileged operations on its behalf.

In Recipe 1.3, we discussed setuid, setgid, and the importance of permanently dropping the extra privileges resulting from their use as quickly as possible to minimize the window of vulnerability to a privilege escalation attack. In many cases, the extra privileges are necessary for performing some initialization or other small amount of work, such as binding a socket to a privileged port. In other cases, however, the work requiring extra privileges cannot always be restricted to the beginning of the program, thus requiring that the extra privileges be dropped only temporarily so that they can later be restored when they’re needed. Unfortunately, this means that an attacker who compromises the program can also restore those privileges.

One way to solve this problem is to use privilege separation . When privilege separation is employed, one process is solely responsible for performing all privileged operations, and it does absolutely nothing else. A second process is responsible for performing the remainder of the program’s work, which does not require any extra privileges. As illustrated in Figure 1-1, a bidirectional communications channel exists between the two processes to allow the unprivileged process to send requests to the privileged process and to receive the results. 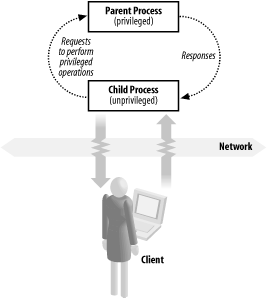 Normally, the two processes are closely related. Usually they’re the same program split during initialization into two separate processes using fork( ). The original process retains its privileges and enters a loop waiting to service requests from the child process. The child process starts by permanently dropping the extra privileges inherited from the parent process and continues normally, sending requests to the parent when it needs privileged operations to be performed.

By separating the process into privileged and unprivileged pieces, the risk of a privilege escalation attack is significantly reduced. The risk is further reduced by the parent process refusing to perform any operations that it knows the child does not need. For example, if the program never needs to delete any files, the privileged process should refuse to service any requests to delete files. Because the unprivileged child process undertakes most of the program’s functionality, it stands the greatest risk of compromise by an attacker, but because it has no extra privileges of its own, an attacker does not stand to gain much from the compromise.

NAI Labs has released a library that implements privilege separation on Unix with an easy-to-use API. This library, called privman , can be obtained from http://opensource.nailabs.com/privman/. As of this writing, the library is still in an alpha state and the API is subject to change, but it is quite usable, and it provides a good generic framework from which to work.

A program using privman should include the privman.h header file and link to the privman library. As part of the program’s initialization, call the privman API function priv_init( ) , which requires a single argument specifying the name of the program. The program’s name is used for log entries to syslog (see Recipe 13.11 for a discussion of logging), as well as for the configuration file to use. The priv_init( ) function should be called by the program with root privileges enabled, and it will take care of splitting the program into two processes and adjusting privileges for each half appropriately.

becomes a call to priv_fopen( ):

The following code demonstrates calling priv_init( ) to initialize the privman library, which will split the program into privileged and unprivileged halves:

Get Secure Programming Cookbook for C and C++ now with the O’Reilly learning platform.