Synchronization and Arbitration in Digital Systems by

Get full access to Synchronization and Arbitration in Digital Systems and 60K+ other titles, with free 10-day trial of O'Reilly.

In this chapter we present arbiters, originally presented in [87], which use priorities to generate grants. Traditional applications of arbiters with simple priority disciplines such as linear priorities and a priority ring are well known. Here, a more advanced formulation of a priority discipline is given, which is understood as grant calculation based on the current state of the request vector.

As an example of a practical application for such priority arbitration we recommend the reader to consider a fast network priority switch, shown in Figure 14.1. It has three input channels requesting access to a single output port. Every request is accompanied with a priority value transmitted through a dedicated priority bus. Priority values (attributes of requests) are generated dynamically. A dynamic priority arbiter takes a ‘snapshot’ of the request bus and calculates grant as a function of the request states (active or inactive) and the state of those priority busses which are accompanied with an active request. The priority discipline of an arbiter is formulated as a combinational function defined on the current state of request inputs, which is less restrictive than conventional, ‘topological’, mappings, such as that used in a daisy-chain arbiter. 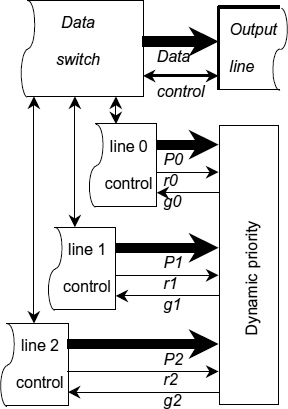 Get Synchronization and Arbitration in Digital Systems now with the O’Reilly learning platform.