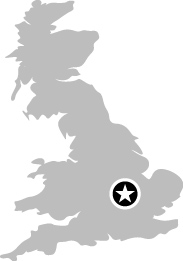 It’s hard for the British National Museum of Computing to rival the Computer History Museum in the U.S. (Chapter 86), as the history of computing has largely been written by U.S. companies. Still, Britain’s role in the early history of computing is important (not least because of the influence of the greatest computer scientist of all, Alan Turing; see Chapter 66).

The star exhibit at the museum is the reconstructed Colossus computer created and used during the Second World War. Colossus was one of the first computers that used vacuum tubes (instead of mechanical relays), thus making it an electronic computer. Like modern computers, it also used the binary system (see sidebar) and was programmable—albeit for the limited task of breaking the Nazi German Lorenz code.

The machine read an intercepted message from a rapidly moving paper tape, and then worked out the settings of the Lorenz machine used to transmit the message. The Lorenz code, unlike Enigma, was based on the binary system. Each character to be transmitted was first converted to a binary number consisting of 5 bits (1s or 0s) using ...