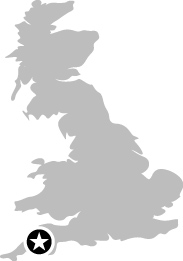 In the southwest corner of the UK lies the county of Cornwall. It was there that the first transatlantic radio transmission was made, from the remote and windswept Poldhu Cove on December 12, 1901.

The rugged Lizard Peninsula, which contains Poldhu Cove and Poldhu Point, is the southernmost part of Great Britain and was chosen by Italian radio pioneer Guglielmo Marconi as a site for experimental radio communication with ships at sea. Geologists will enjoy the presence of green serpentine rock, and it was here that titanium was first discovered in 1791.

The wireless station built by Marconi and his company, Marconi’s Wireless Telegraph Company, was not only the site of the first transatlantic transmission but also the place where, in 1910, the first SOS (dot dot dot, dash dash dash, dot dot dot in Morse code) was received in Britain from a ship at sea. And in 1962, the Goonhilly Downs (see Chapter 48) area of the peninsula was chosen as a ground station for the first transatlantic satellite, Telstar.

But 61 years before Telstar’s ability to send television pictures, Marconi’s ...