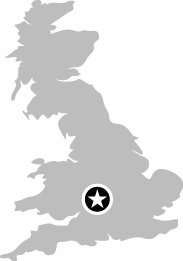 Even aficionados of the Science Museum in London (Chapter 77) are frequently unaware that the museum has an enormous outpost on the disused Second World War airfield at Wroughton near Swindon. The Swindon museum consists of six hangars (each 0.4 hectares in size) filled with the largest objects in the museum’s collection (only about 8% of the overall Science Museum collection is visible in London).

Even though the outpost has been in use since the 1980s, it is not well known because it’s only open to the public on prearranged tours during the summer months. To take a tour of the Science Museum in Swindon is to enter a secret world that few have had the privilege of seeing.

The Swindon museum contains 18,000 large objects including aircraft, cars, motorbikes, tractors, fire engines, large machines and scientific instruments, and equipment used in printing and telecommunications. There’s the only Lockheed Constellation aircraft in the UK, a complete De Havilland Comet 4B airliner (the version with round windows that didn’t tend to pop out in flight), two deactivated nuclear warheads, a machine used to try to dig a Channel Tunnel in 1921, lifeboats, literally tonnes of 1960s computer equipment, ...