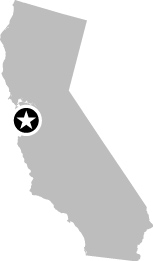 Shockley Semiconductor (see Chapter 84) spawned the prototypical Silicon Valley startup company, Fairchild Semiconductor, founded in 1957. Innovative yet focused on products, not just research, Fairchild went on to spawn many other Silicon Valley greats (including Intel, LSI Logic, and AMD), and its offspring are frequently referred to as the Fairchildren. And it was at Fairchild that the planar process for silicon chip manufacturing was invented.

Around the same time, in 1958/1959, Jack Kilby (at Texas Instruments) and Robert Noyce (at Fairchild) invented the integrated circuit, where multiple transistors (and other components) were made on a single piece of silicon. Kilby built a circuit based on the mesa process (see sidebar) and connected the components with fine gold wires; Noyce’s circuit used the planar process, which had superior wiring. The planar process won the day, but Kilby won the Nobel Prize.

Using the planar process, Fairchild was able to build working integrated circuits and started supplying prototypes in 1960. In 1961 it announced a line of integrated circuits with the claim that they would reduce the size of a computer by up to 70%. The simple circuits ...