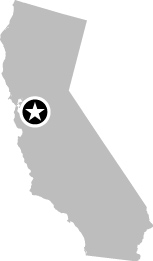 It’s not unusual to hear people say of Silicon Valley, “there’s no there there” (although that phrase is actually a quotation and refers to Oakland, California, just across the San Francisco Bay). It’s quite true—Silicon Valley is one long industrial suburb that has encroached on the towns between San Francisco and San Jose. Finding its iconic places is no mean feat.

Since the founders of Hewlett-Packard were early pioneers of Silicon Valley, the garage where they started the company is a landmark (see Chapter 90), and Apple takes its name from the area’s apple orchards (now replaced by featureless buildings). But the place that puts the silicon in Silicon Valley is 391 San Antonio Road in Mountain View. Today, the building houses a grocery store selling the sorts of produce that the area used to grow. To understand its significance to Silicon Valley, we need to go back to the 1950s.

In 1956, William Shockley and a group of engineers opened the Shockley Semiconductor Laboratory at #391. Shockley was one of the co-inventors of the transistor (more on transistors on page 332) and won the Nobel Prize the same year he helped found Silicon Valley. The new company (actually ...