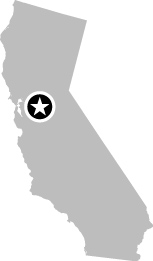 The Joint Genome Institute’s Production Genomics Facility in Walnut Creek, California, doesn’t look like ground zero of a biological revolution, but set back from leafy Mitchell Drive is a 5,600-square-meter industrial building where a large section of the human genome was sequenced.

In 1997, the U.S. Department of Energy set up the Joint Genome Institute to bring together work on DNA sequencing performed by Department of Energy laboratories around the country. The space leased in Walnut Creek was used to build a new laboratory that took part in the Human Genome Project.

In 1990, under the guidance of James Watson (co-discoverer of the structure of DNA; see Chapter 71), the Human Genome Project was created with the goal of sequencing the human genome by 2005. Sequencing a piece of DNA involves breaking it down into its most basic elements, the four nucleotides thymine (T), adenine (A), guanine (G), and cytosine (C), and finding the order in which they appear.

The nucleotides join together in pairs (A joins with T and C joins with G) called base pairs. The pairs can join in either direction (i.e., ...