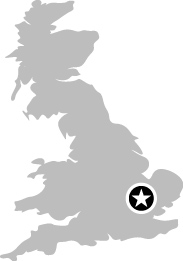 “We Have Found the Secret of Life”

At lunchtime on February 28, 1953, James Watson and Francis Crick announced to the patrons of the Eagle Pub in central Cambridge that they had found the secret of life. Watson and Crick were finally convinced (after a week of verification) that they understood the structure of DNA. Nine years later, they were awarded the Nobel Prize.

Watson and Crick conducted their work at Cavendish Laboratory, which at the time was located on Free School Lane; the Eagle Pub was a short walk away, and a common eating place for laboratory scientists. The laboratory was set up in 1874 as part of Cambridge University’s physics department. Watson and Crick were working on biological applications of X-ray crystallography: the study of the structure of molecules using X-rays to determine the placement of atoms.

Their study of DNA, along with that of others around the world, led to the theory that DNA was helical. After playing with cardboard models of the chemical components of DNA, Watson and Crick ...