After CERN (see Chapter 32), Fermilab is the most famous particle accelerator and high-energy physics laboratory in the world. It has a significant outreach program that includes educational events, exhibits aimed at the under-12 set, Sunday talks by physicists, and the ability to take a guided tour.

Fermilab was created in 1967 and named in honor of the Italian physicist Enrico Fermi (who won the Nobel Prize in Physics in 1938). The laboratory operates particle accelerators (Figure 97-1) to do research into subatomic particles. Fermilab was the site of the discovery of the bottom quark in 1977 and the top quark in 1995, and in 2008 the lab announced the discovery of the Omega-sub-b particle made from two strange quarks and a bottom quark. 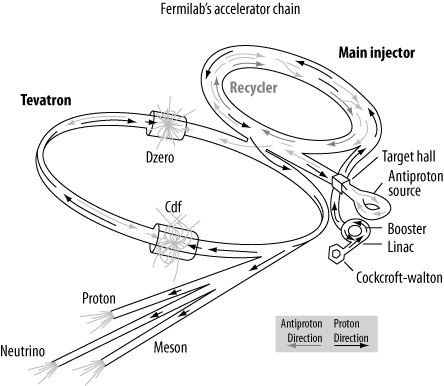 The lab also does extensive work on neutrinos, including sending a beam of neutrinos through the Earth ...