Get full access to VoIP Voice and Fax Signal Processing and 60K+ other titles, with free 10-day trial of O'Reilly.

In this chapter, Ethernet, DSL, and cable interface options are considered for VoIP bit rate calculations. Figure 11.2(a) shows the VoIP adapter or customer premises equipment (CPE) with an Ethernet interface. This type of combination is referred to as a VoIP CPE on a local area network (LAN) interface. This Ethernet interface is terminated on the distributed LAN in an office or to a service provider's modem such as DSL or cable modem. VoIP CPE will send Ethernet packets, and the DSL modem will perform disassembly of the Ethernet packet and frames into asynchronous transfer mode (ATM) cells (as one of the options considered in this book) for sending on the DSL interface. In Fig. 11.2(b), VoIP CPE has a built-in DSL modem. The VoIP application gives a basic payload, and the DSL interface will send voice packets as ATM cells usually with PPPoE. In some deployments, PPP over ATM (PPPoA) [Gross et al. (1998), Heinanen (1993)] and IP over ATM (IPoA) [Laubach and Halpern (1998)] may be used. PPPoA and IPoA consume a lower bit rate than PPPoE. In this chapter, four different interface combinations are considered for bit rate calculations with G.711, G.729A, and G.723.1 codecs. 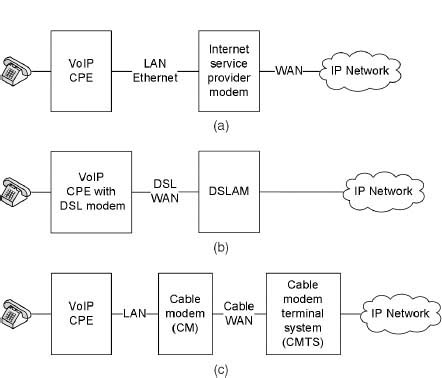